Timothy Charles Holmseth explained on Truth Social today the origins of his plan to infiltrate ‘Q’.

The report is below. 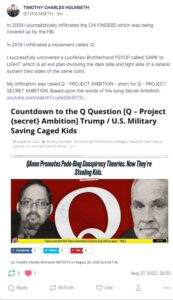 In 2009 I journalistically infiltrated the CIA FINDERS which was being covered up by the FBI.

I successfully uncovered a Luciferian Brotherhood PSYOP called ‘DARK to LIGHT’ which is an evil plan involving the dark side and light side of a satanic system (two sides of the same coin).

My infiltration was called Q – PROJECT AMBITION – short for Q – PROJECT SECRET AMBITION. Based upon the words of the song Secret Ambition.