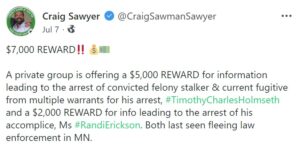 There is really not much more I can say, other than, Craig Randall Sawyer is not a ‘well’ man and is a pathological liar.

The following addresses claims made by Craig Sawyer against Timothy Holmseth.