Timothy Holmseth is a human trafficking victim of the State of Minnesota. Holmseth became a political prisoner after he was kidnapped by State of Minnesota four times. Holmseth was charged with publishing evidence and information about Jeffrey Epstein’s child procurement operation. Holmseth was locked in a private for-profit detention center and tortured by his captors who were trying to coerce Holmseth into signing a confession (which Holmseth would not do). 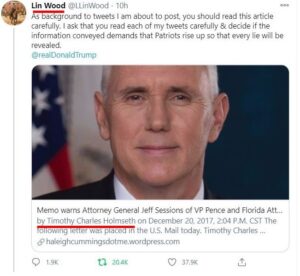 Timothy Holmseth is being actively hunted by CIA, Luciferian Brotherhood, and paramilitary operatives connected to Hillary Clinton. The threats to kidnap, torture, and murder Holmseth and his loved ones are in the possession of the United States District Court – Minnesota, and the Criminal Investigative Division of Fort Campbell, Kentucky and other law enforcement. 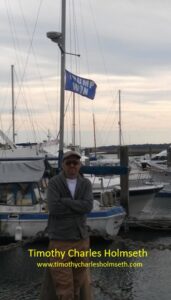 In 2019, Timothy Holmseth became the news reporter for the Pentagon Pedophile Task Force, which was created through the Donald J. Trump White House, per Presidential Executive Order, and operates through United States Army Intelligence Support Activity to provide actionable intelligence of international crimes and crimes against humanity to the U.S. Military through special liaison to President Trump and Joint Special Operations Command.

In 2022, Timothy Holmseth revealed he had effectively infiltrated an international organized crime apparatus that was planning the overthrow of the U.S. Government.

In 2019, Holmseth, and Minnesota judge Randi Lynn Erickson (who escrowed Holmseth’s human trafficking evidence and publications to secure them from unlawful seizure) were told very specific details of several child rescue operation conducted by U.S. Marines in California where thousands (2,500 total) of children were moved from their confinement in cages in underground tunnels [abandoned China Lake military base] to U.S. Military hospitals.

Straight told people at his seminars there is a judge at GITMO by the last name of Crandall. Straight suggested Judge Crandall was connected to Marcella Crandall and said it was all prophetic. Straight also told his seminar students that John F. Kennedy Jr. is alive and serving as “Vice President” of the United States.

In 2020, Straight told Holmseth he was in a photograph with another one of Holmseth’s news sources named Lawrence Dean O’Bryan. Straight said he was on a “mission” with O’Bryan in South America in the 1980’s.

In 2019, simultaneous to his news reporting, Timothy Holmseth was being assisted by Christopher E. Hallett, E~Clause LLC, Florida (E~Clause stands for the “Emoluments Clause).

Hallett was working under consent of U.S. Congress to perform loss prevention for the U.S. Government. The documents he filed contained evidence that involved NATIONAL SECURITY pertaining to international COVID-19 tracking codes and the largest human trafficking operation in the history of the world.

On November 15, 2020, Hallett was assassinated – shot in the head – in his Ocala, FL home. Then – ALL of Hallett’s court filings VANISHED! NO TRACE remained that the file ever even existed.

However, before his murder Hallett sent a copy of the receipt to Minnesota judge Randi Lynn Erickson. Erickson was working with Hallett, as well as David Lester Straight, on a task force called the Pentagon Pedophile Task Force.

However, the fact the files VANISHED essentially proves Blanchard was not the person or entity that stood to benefit from Hallett’s murder. TROVES of evidence suggest something is amiss in the Blanchard case.

Wood and Straight were coordinating.

On January 4, 2021, Wood launched his famous Tweet storm wherein he accused world leaders of raping and murdering children. Wood said the murders are captured on film, and he declared he held the key pass code to the files. Holmseth believes the video Straight viewed of VP Pence raping a child was among the videos Wood possessed. Wood’s very first tweet was Holmseth’s MEMO to AG Jeff Session warning Trump about Pence and an FBI agent using the alias John Regan to traffic kids through the Ukrainian Embassy in Washinton DC.

In 2021, mainstream news reported about the 2,100 kids Straight had told Holmseth about in 2019. However, the fake news, now under Biden, was claiming the 2,100 children vanished under President Trump’s watch.

In 2021, following J6, Straight abruptly moved to Texas with a woman named Bonnie Thomas who he claims is his wife. Straight created a business card calling himself a “Colonel” with the Republic of Texas, Texas Rangers. Bonnie claims she is “Counsel General” of Republic of Texas. The Straight’s set up an “Embassy” connected to the United Nations. Straight took with him all the evidence of crimes against humanity that implicated world leaders in unspeakable torture, rape, and murder. Straight secured [stole] evidence [from an eyewitness] [under the guise of being a federal agent] regarding the Clinton Foundation’s Dark Web videos of infant rape, as well as a Bitcoin wallet worth untold millions of dollars.

In 2022, Droel Law Firm (TX-MN) filed responsive documents to an Injunction filed by Randi Lynn Erickson who was being threatened (along with Holmseth) by former federal agents and Navy SEALS with kidnap, torture, rape, and murder. 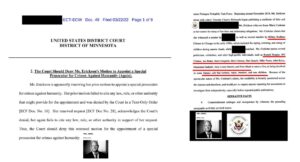 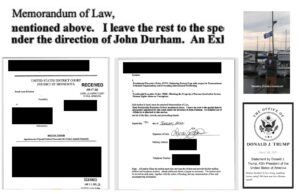 In 2022, David Straight was forced to admit in writing that he was never a Navy SEAL or a federal agent after he was publicly confronted by former Navy SEAL Don Shipley. Straight now claims he has only been a private contractor.

Timothy Holmseth believes the evidence shows David Straight was on a “mission” with Special Operator Lawrence Dean O’Bryan in the 1980’s in South America because Straight is also an assassin who secretly works at the behest of Presidents.  Straight brags during his seminars about such things. Straight told Holmseth and Erickson if someone crosses him, he will “kill them in their kitchen”.

Straight told Holmseth the name of a Navy SEAL who he believes traveled to Florida and Georgia and trained the ‘shooter’ in the assassination of Christopher Hallett.

The SEAL is directly connected to Attorney Lin Wood. 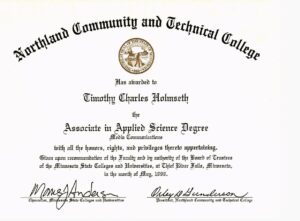 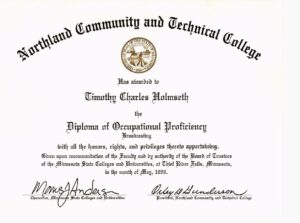 Timothy Charles Holmseth, deemed a credible witness by the FBI, is the only news reporter authorized to report original unique content for the Pentagon Pedophile Task Force (PPTF). Timothy was brought onto the PPTF after his work-product was obtained by intelligence agents who delivered it to the Pentagon; it contributed to the arrest of Jeffrey Epstein.

Timothy became a heavily targeted witness after uncovering a world-wide child trafficking operation that involved rogue CIA/FBI black operators kidnapping and selling babies and kids through the Ukrainian Embassy in Washington DC. The trafficking operation is connected to Hillary Clinton and Joe Biden.

Timothy also reported extremely disturbing information regarding Vice President Mike Pence, which resulted in a high-level plot against Holmseth between VP Pence and Minnesota Deep State operatives to have Holmseth falsely imprisoned and murdered. Holmseth was protected by members of a task force and U.S. Marshal’s attended a court hearing in Crookston, Minnesota to interfere with the plot.

Shortly after the insurrection on November 3, 2020, when the election was hijacked and stolen by a foreign power, Attorney Lin Wood launched his famous Tweet storm wherein he exposed pedophiles and organized satanic crime in government. Wood’s first tweet was a MEMO Timothy Holmseth warning President Trump about the international trafficking operation. 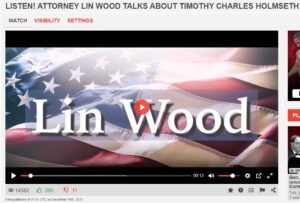 Timothy has been recognized with first place awards for news reporting and column writing by the North Dakota Newspaper Association including Best News Series, as well as awards from Boone Publishing. 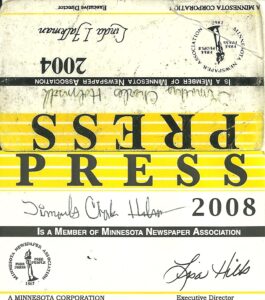 In 2009, Timothy Holmseth was contacted by a private investigator/bail bondsman working for an attorney that was representing the mother of a missing five-year-old child from Florida named HaLeigh Cummings.

Timothy Holmseth (1) Conducted over one-hundred hours of recorded interviews with case witnesses, law enforcement, lawyers, social services, and others (2) obtained highly sensitive information regarding the activities of satanic organized crime in Florida (3) obtained names of kidnapping operatives claiming to be FBI and CIA agents that were selling babies through the Ukrainian Embassy in Washington DC (4) was told intimate details about why HaLeigh Cummings was missing, who really took her, how they did it, who police had questioned, who possessed child porn of HaLeigh, the involvement of Florida DCF (5) the connection to the Casey Anthony murder trial and Gloria Allred (6) learned the connection to former Florida Governor Charlie Crist, disbarred and federally convicted Ponzi schemer Scott W. Rothstein, and convicted sex offender Jeffrey Epstein.

Timothy Holmseth was subsequently sent covert recordings of CIA operatives that exposed the truth about the murder of Caylee Anthony and a biofuels scheme that was the subject of a RICO investigation in Florida involving Scott Rothstein and Jeffrey Epstein.

Timothy Holmseth assisted the Minneapolis and Florida FBI and became the target of a shadow government operation by operatives embedded into local, state, and federal agencies including Florida, Minnesota, and Indiana. 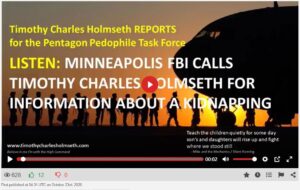 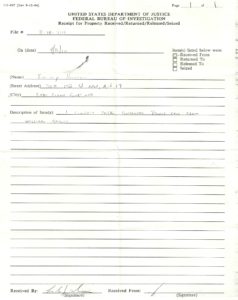 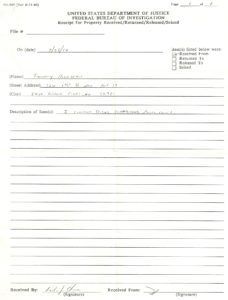 Timothy received voice changer calls from persons identifying themselves as “The Deep State” calling from telephone numbers such as “Trump Organization” “Clinton Global” “CNN” “Republican National Committee” “Mar-A-Lago Resort” “Doral Resort” etc. He was warned to remove his websites or face consequences including the kidnap of his granddaughter. His home-office was raided by the Minnesota Pine to Prairie Gang and Drug Task Force which seized his computer and destroyed his hard-drive in effort to destroy all of his interviews and work product. Timothy subsequently located back-ups of his investigative files. 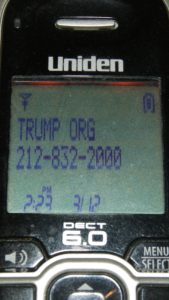 In 2018. Timothy Holmseth exposed what may be the most significant and far-reaching conspiracies of our time when he revealed the bones and teeth purported to be Jacob Wetterling were not human – and – the missing boy had been kidnapped and ritually sacrificed by a cult involving his father.

In 2018, Timothy was arrested by police officers in East Grand Forks, Minnesota and charged with publishing content on the Web. Minnesota asserted it was enforcing a ‘domestic violence protection order’ issued against Timothy in a Broward County, Florida Family Court by a person Timothy never met – in a State where Timothy has never been.

Timothy was falsely imprisoned in Polk County, Minnesota. However, Timothy was taken into protective custody of the Pentagon Pedophile Task Force and given lawful assistance by E-Clause LLC, which does loss prevention for the United States government.

In 2019, investigative work product and evidence of an international child trafficking operation through the Ukrainian Embassy in Washington DC was published on the Web.

Timothy has never been sued.

Timothy Holmseth is the father of three and blessed with three grandchildren.