If you are outraged and frightened by the stories of torture being inflicted upon J6 prisoners in Washington D.C. – you better PAY ATTENTION NOW because your future has already been told.

Holmseth’s highly detailed expose featured the plight of a ‘Q Clearance’ U.S. Marine whose family had been targeted by the CIA for torture, murder, and INSANE mad scientist experiments on U.S. Military bases.

Whistleblower Anne Hanly, the daughter of the Marine, began risking her life to expose what happened and is still happening to her brother John Hillary Hanly at the hands of the U.S. Government. West was a satanic CIA torturer whose mission was to see just exactly how much torture a human being could endure without dying. 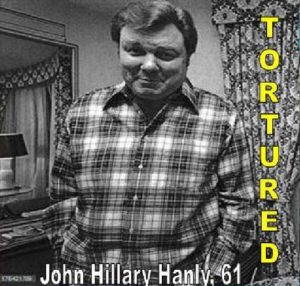 CLICK HERE TO BE TAKEN TO A POPULATED LIST OF STORIES ABOUT CRIMES AGAINST HUMANITY AGAINST THE HANLY FAMILY THAT WILL BLOW YOUR MIND!!!!!

On December 18, 2021 we received an urgent communication from Anne Hanly that her brother John is being tortured in California. We asked Anne if she would like us to make it public and she responded:

Yes, please do. They claim that he is swinging at nurses, but Napa State Hospital was experimenting on him with a combination of 6 different medications of psychiatric drugs for a condition that they have created by human medical experimentation and this is harming his body and mind.  I have been strong with them as I watch Napa State Hospital and all of their agents destroy his mind and body and prevent him from ever coming home and seeing his family and now they are using that we cannot see him unless we get the Covid vaccine too or show verification of the nose swab which contains ethylene oxide in it.

Napa State Hospital has abused John’s health and well being and ignored all  of my requests for a well being check including his appointed conservator have all contributed to John’s emergency level need and long overdue medically needed care for which his condition and harm has been created by them,
Now, the Napa State Hospital has what they call “sitters” in the room with him.  What the sitters role actually is and whether this is legal or not is questionable, especially since this facility has created harm to John’s body and mind. They are not his family or bloodline and are not doctors or nurses.
Dr. Louis Jolyon West at UCLA used to tie John down to the bed and this may be a part of the mind control programming in his past that is causing his reaction to protest to anyone tampering with his body any longer.  They are refusing all but two family members from visiting with him at Queen of the Valley Hospital, a facility where they have transferred him too many times over the years.  I am perplexed as to why these sitters are in the room with him from Napa State Hospital, a place of human neglect and experimentation of human beings and a place that has been adverse to families and maintains extreme control over their families and patients. My mother cried when Dr. Louis Jolyon West took her to see John in restraints as a 12 year old boy tied to a bed and he literally was harming my mother emotionally and mentally with all of his lies and deceipt about his plan for John and other children.  This harm was imprinted and John does not like to be touched or violated any longer and they are making a mockery of John where the nurses see his trauma reaction, but do not know the extent to which he has been tortured and suffered.
My sister and her husband were turned away from Queen of the Valley yesterday from seeing our brother because she is not on the list.  This list is created by Napa State Hospital.  So, when family is not allowed to see him, not even our medically trained cousin, then why are these sitters sitting in with him all night long and for what reason?
This is a case of human experimentation and medical harm to John’s mind and body and with so many tentacles involved and so many hidden secrets all under the guise of medical care and all of them are accomplices to the deliberate and intentional torture to John as a human being.  They are intentionally isolating him, torturing him, controlling and abusing him and Dan Arbios, his conservator and guardian has refused to take him out of this facility no matter how many times that they harm him.
We need to have help or John will be killed under the guise of medical science and care and I assure you that all of this is intentional and well organized with many involved.  John’s life is in danger under medical science and government is complicit and we must get John out of this medical imprisonment entirely and get him the right kind of health care and a safe house away from these evil people.  There is an absolute cover up of their harm while they have taken my brother’s life to near death too many times and he is no longer able  to take this medical experimentation and torture.  He will die and they are all involved.
I pray for the life and safety of my beloved brother John Hilary Hanly and for grace so that he may be brought to safety away from their control and deception to enslave him for the rest of his life for their torture and fake medical care.  This is not medical care.
John’s brothers and sisters are there for him.  We went to see him and were all turned away at the control of Napa State Hospital who has harmed him to his current condition and refused family support, family love, and family visits.  This is torture to isolate John from his family when he is sick.  This is not medical care.  The control they have is being exploited for their own personal gain and so that there are no family witnesses.  My cousin did see him briefly, but knows nothing about the history of John.
John does not need to be tied down to the bed as they claim.  They need to allow us to see him and be with him to help him his with distress and anxiety over his failed advocacy to the right to his own body and mind.  John needs the protection from Napa State Hospital and all of their agents and from the Public Guardianship and Conservators office and all of their agents who have not had John’s health or safety in mind.  They know he has been harmed and are part of it. I pray for help and for justice and for John’s safety and life.  They are killing him.  And then taking care of him and then this cycle begins again each time weakening his body and harming his mind and isolating him from those who love him.
I affirm that the statements that I have made about medical abuse and torture of John Hilary Hanly are true and correct and that John is being intentionally harmed under the guise of medical care as they slowly kill him through their means and methods while pretending that they are taking care of him.
Sincerely with gratitude,
Anne Hanly
PS

Probate Court judges are fully responsible for their decisions to place John in harm’s way.  I highly recommend that these judges in the Probate court LPS confidential hearings’ court be under investigation for having put John in harm’s way and for rendering a decision that is allowing John to be tortured medically to near death and now the end is showing that he is unable to take any more torture to his mind, body, soul.  These judges know that John is a victim of heinous abuse and it is wrong that anyone would reflect that he is to blame for what they have done to him because it never stopped lifelong.  He begs for reprieve and I am listening and advocating and now I need the people who have the position to stop this abuse against John and disinformation to his medical file that places him permanently in harm’s way.

These judges should be investigated as to their motive for rendering John a medical prisoner to be tortured and isolated and devalued. He is suffering and does not deserve this at all.
None of us deserve this and the retaliation is real and they mean to harm.
Anne
UPDATE: 12/19/21 – 12:18 P.M.
Thank you sincerely.
He is fighting for his life and it is understandable that John does not want to be touched. with family present he will calm down and they are blocking us to keep him under their mind control programming aided by the use of their cocktail of pharmaceutical harmful drugs that have rendered his body in life threatening status.
I  want the lies exposed and how they have pointed the finger at John and pretend he is dangerous by omitting what they have done to him and the dangerous experiments perpetrated against him.
My sister will speak with you too about what she knows about the system’s handling of this and her husband said, “this is a time he needs us the most and we are right here and they are blocking family witnesses.  They have John as a prisoner with no value to his life and this cannot be covered up.
I was not properly noticed by written documentation of this probate LPS scheduled hearing confirmation and only received the notice a week after I had pushed for John’s well being check and emergency medical care. We respect all medical care that is saving and protecting lives, but these people are harming him and covering it up for decades now and we must not allow this.
Sincerely,
Anne Hanly