The report featured statements from David Lester Straight made by Straight before January 6, 2021.

I am now reporting statements from Straight that were made after January 6, 2021.

Straight said he was putting on a law seminar in Texas that was not open to the public.

“I was going to let you know the next 30 days I’ll be in Utah, northern Washington, Texas, and here. It’s about an hour and a half southwest of Dallas Fort Worth Airport – it’s a place called Keene. It’s on the north side of – well, I guess, Keene, Waco, Killeen, are three closest areas around the military base there,” Straight said.

“I got a great phone call from Princess [Booba] on the seventh of January when I was in DC. And she told me, ‘you know what President Trump did yesterday’. And I said ‘no, tell me’. She said he declared that the United States was bankrupt to the Hague on the world stage and he sent a letter to the World Bank and he declared sovereignty of the United States of America and he ordered from [Princess Booba’s] uncle 50 thousand metric tons of gold to be delivered to Texas the following day. So they had to scramble – they got three 747’s to haul that 50 metric tons from Hong Kong to Texas,” Straight said.

Straight said many times that he was “Secret Service” for George Bush (Texas). He said his Secret Service background is how he was able to view highly classified videos of VP Mike Pence raping a little boy.

Straight said he was appointed to three Presidential Commissions by Donald Trump. He said the commissions were “Judicial Corruption” “Human Trafficking” and “Space Force”.

Former Minnesota judge Randi Lynn Erickson asked Straight if he is bonded through the State to be a Colonel who is gathering evidence of crimes against humanity from victims and witnesses. Straight laughed it off and said he is backed by “gold”. 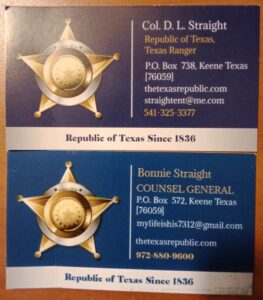