You were watching George Orwell’s 1984 play out before your very eyes when you saw former U.S. Marine, 911 whistle-blower, and founder of The Children’s Crusade Field McConnell snatched off the street (abducted) because his name appeared in a ‘computer system’.

Field McConnell, 70, Plum City, Wisconsin was recently kidnapped off the street by Pierce County Sheriff’s deputies in Wisconsin who had no Warrant in hand, but rather, grabbed him because they were told McConnell’s name was entered into the National Crime Information Center by somebody in Florida

Field McConnell and I (Timothy Charles Holmseth) have been targeted by a group attempting to silence our reporting and broadcasting for the Pentagon Pedophile Task Force.

And we are exposing their tactics for the world to see.

It’s already been proven by Timothy Charles Holmseth that Florida judges and corrupt law enforcement improperly enter names into the NCIC so they can have anybody unlawfully grabbed off the street by law enforcement (which is called kidnapping and violates The Hobbs Act).

My reporting resulted in Alec Hash’s name being removed from the system where it did not belong in the first place. 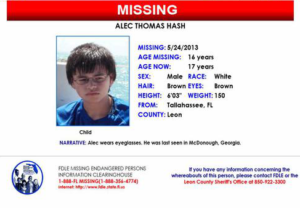 And now, on November 9, 2019 – that judge behind that stunt – Karen Gievers, is announcing she is off the bench.

On March 24, 2014 I began one of the most in-depth and disturbing journalistic investigations of my career after I was contacted by a Florida doctor named Mark Hash who told me he was put in jail by a judge in Florida that was attempting to kidnap his son for human trafficking.

I soon came to realize Dr. Hash knew the names and possessed the records of high-powered officials that were obtaining pills at an illegal pill mill, which was why Dr. Hash’s son Alec Thomas Hash was targeted for judicial abduction.

At the center of the case was a despicable creature; a so-called judge named Karen Gievers. Evidence showed Gievers was an extremely disturbed human being that enjoyed no relationship with the truth, and, moreover, was obsessed with the ‘custody’ of children. At one point Alec Hash’s name was improperly placed in the NCIC system

The case eventually led me to obtaining the actual medical records that showed people from the following agencies (see below) were illegally acquiring drugs from a pill mill – and Dr. Mark Hash knew about it.

I (Timothy Charles Holmseth) obtained information that proved employees of the following agencies were serviced by the First Impressions pill mill.

On November 9, 2019 the Tallahassee Democrat announced the following about Karen Givers.

“Former Second Circuit Judge Karen Gievers has announced her return to the private practice of law following her constitutionally required resignation from the Circuit Bench on her 70th birthday this past April. “In my new role, I plan to be involved in protecting the constitutions of Florida and the United States and plan to also help children harmed by the foster care system, among other matters,” Gievers said. Before being elected to the bench, Gievers had her own law practice and had become known as one of best trial attorneys in Florida and as one of the leading statewide advocates for foster children. Gievers will base her practice in Tallahassee but will handle matters around the state. She can be reached at gievers@karengievers.com; the website address is karengievers.com.”

RECENT COMMENTS FROM THE ROBING ROOM ABOUT KAREN GIEVERS

Former Chair of the Florida Democratic Party and Tallahassee mayor Scott Maddox has been indicted and is singing like a canary to the FBI. Credible rumor is he’s telling of his long term connections to the judiciary who protected him, including crooked judge Gievers who, instead of recusing herself, conducted his trial after denying discovery, and ruled in his favor. The clock is ticking.

Gievers is an enemy to The United States Constitution, a domestic terrorist. Ignores Florida and US law, her victims rely on the District Court of Appeals the The Florida Attorney General for rescue.

Gievers was a dark stain on the United States judiciary. Repeatedly ignoring the US Constitution and Florida law. Illegally putting innocent people in jail requiring their rescue by the DCA and the Florida Attorney General. A true psychopath. Her bizarre behavior was even discreetly mentioned by the Florida governor when he replaced her. But alas, the fat lady has sung. Now she’s off to new adventures in the nursing home.

Don’t bother preparing for hearings or trials. This judge has her mind made up before you set foot in the courtroom. Evidence means nothing to her, and due process even less.

Florida judge sitting atop the pyramid of a criminal extortion operation?

Facebook0Tweet0Pin0
About Timothy Holmseth 521 Articles
Timothy Charles Holmseth is an award winning news reporter and investigative journalist. He is an FBI witness in a national profile kidnapping case. He captured rogue CIA and FBI child traffickers on tape discussing their operations. He has been targeted for a decade. In 2019 Timothy Charles Holmseth became part of the Pentagon Pedophile Task Force. Timothy Holmseth is the only reporter authorized to report original content for the PPTF. There is ONE MAN between Timothy Holmseth and President Trump.