Lin Wood, an attorney with an impeccable reputation, and a protector of innocent children, has fallen under massive attack because he exercised his First Amendment to alert the nation and world to corruption and crimes against children.

“I have learned that the executive committee of The Lawyers Club of Atlanta wants to expel me from the organization (after being a member in good standing for over 35 years).

I hear that Mercer Law School in Macon (my alma mater) is likely going to remove my name from a courtroom named in my honor and then keep the significant monetary donations I have made to the school to help it.

Efforts are underway to disbar me with the State Bar of Georgia.

Why??? Because I exercised my First Amendment right to express my political views and have been legally fighting for honest elections???

I will not be intimidated by such agenda-driven attacks designed to suppress my Constitutional rights.

Stay strong. Strengthen your community of friends and believers who share your values and principles. Keep speaking truth. 🙏” 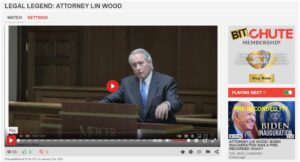