George Floyd cried for his mom before he died.

There’s something you need to know about the cult that really runs Minnesota.

In 1989, the Luciferian cult in Minnesota fooled the whole world when they brought in the Minnesota National Guard to search for a little boy from St. Joseph, Minnesota named Jacob Wetterling who was abducted off the side of the road.

It was a false flag ritual.

Patty Wetterling went on to use Jacob’s name to run for office and received a campaign donation from Barack Obama. She is now the Chairman of the Board at the National Center for Missing and Exploited Children (NCMEC).

In case you didn’t know – the NCMEC is an information harvesting operation used to collect intelligence from possible witnesses in missing children cases. It is run by the bad guys, folks.

And then there is the evil witch Amy Klobuchar – eyeballs deep into it all.

“Patty Wetterling is a woman of unbelievable courage. Her son Jacob was kidnapped at gunpoint 27 years ago, and all that time she has kept the hope alive that he would be found,” said Klobuchar. “Patty Wetterling and her family for years have turned their grief into action. She has saved so many lives in Jacob’s memory. I just wanted to take the moment personally to recognize Patty for her strength and her courage and her grace.” 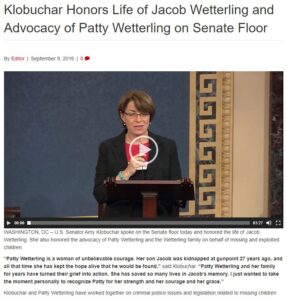 In 2016 the Minnesota cult members tried to pretend like they ‘solved’ the Wetterling case by coercing a false confession from a local pervert named Danny Heinrich (who had been cleared by the FBI very early on in the case).

It was all bullshit.

Law enforcement claimed Heinrich led them to Jacob’s burial site where they found Jacob’s bones etc. FOX NEWS and all the rest of the fake news spread the news far and wide that Jacob’s remains had been found.

It was planted animal bones mingled with an old shirt of Jacob’s.

Jacob, according to an eyewitness, said he was present and assisted when Jacob’s father, Jerry Wetterling, murdered Jacob during a ritual sacrifice.