In 2011, Hillary Clinton-associate Wayanne Kruger gave news reporter Timothy Charles Holmseth the names of CIA/FBI operatives that were stealing kids with CPS and moving them out of the United States through the Ukrainian Embassy in Washington DC.

By the time the 2020 election cycle came around all hell had broken loose with Joe and Hunter Biden and their corruption with Ukraine.

There is a man from Florida, who works with Wayanne Kruger, who appears to have confessed to being a serial child rapist and murderer – and – last night he tried to tell everyone how to use yachts to traffic kids onto ocean freighters in international waters.

And somebody STOPPED him by cutting his Livestream.

Here’s how the story unfolded.

On October 25, 2020 a video entitled We Bring this Message from Timothy Charles Holmseth was published on the You Tube channel COMMAND POSTS.

Within hours of the Holmseth video being published, a man from Florida, who claims to be closely affiliated with the FBI, went on You Tube Livestream and declared that a photo of Holmseth in the video, posing with his children and grandchildren at a restaurant next to a Marina in Alabama, was evidence that Holmseth purchased a half-million dollar yacht and is trafficking children across the ocean.

Murtaugh’s wild claims prompted a responsive story on You Tube that confronted the disturbing fact Murtaugh continuously claims to be associated with the FBI.

Murtaugh then returned to You Tube Livestream last night and doubled down on his claims that Holmseth purchased a yacht to traffic kids.

But then – something very interesting happened.

Murtaugh began explaining in detail about how boats are used to traffic children out of the country by moving the children into international waters where they are then moved onto foreign ocean freighters. Murtaugh began showing maps and explaining how easy it is to do – and how to not get caught.

And as he spoke – his Livestream was cut!

As of the time of this publication the video has not returned to You Tube.

However, the audio was captured by Pentagon Pedophile Task Force.

It’s written below (in part) and/or you can listen to it on the You Tube below.

The following is an excerpt of William K. Murtaugh (a.k.a. Filthy Murt):

“When Timothy Charles Holmseth showed up in a picture in front of a yacht dealer things began to click. And the kind of beating around the bush from the FBI kind of made sense.

Because all Tim Holmseth – or all these people had to do was they buy themselves a boat. Probably a thirty-footer – thirty-five-footer – boat like that one in the background – that one in the background would be the perfect size. And they don’t have to go across the Atlantic Ocean they don’t have to go to England – they don’t even have to go to the Bahamas which is not that far – or over to Jamaica or Puerto Rico or any of these other places. All they have to do – all they have to do is get into international waters.

Now the coastline of Florida – the border of the United States off the State of Florida is 12 miles – they just doubled it – it used to be six and a half miles now its twelve miles. So somebody buys a boat. And decides that they want to take a mother and her child that she managed to get out of CPS custody illegally – if she can get to where this boat that was bought allegedly they could get on the boat and they could get out to international waters. And when they get into international waters they can then transfer to a freighter. A merchant marine freighter with a foreign flag. Something interesting. I would recommend people watch a movie called A Clear and Present Danger. The opening of that movie is there is a luxury yacht out in international waters and the captain of the boat goes ‘be prepared to be boarded’ because, if you are a U.S. Flag Ship or boat in any waters, meaning international or domestic waters, U.S. Coast Guard can and will search your boat. It’s the law. This is the maritime law that Kirk Pendergrass squawks about. This is the actual maritime law – this not some thig he made up in his streams. But you get that boat out into international waters and you can get whoever is on your boat onto the freighter Coast Guard can’t touch you. They can’t board that boat. Especially if the boat or ship in this case is a foreign flag in a country that does not have an international treaty with the United States. So it is the theory of law enforcement that these parents that are having this big fight with CPS might be getting out of the United States by boat. Relatively cheap thing to do”.

Since 2006, William K. Murtaugh, 70, Apopka, Florida was most notoriously known for a sick letter he wrote online wherein he claimed to know the identity of the abductor of a missing child named Trenton Duckett.

The Caretaker Letter
To Trenton’s caretaker
Hello my friend:I now know why Melinda trusted you to take care of Trenton.
I know that you are monitering the discussion forums.
You know time is running out.
Listen to your soul mate. Things are going to work out.
It is time to return Trenton to his family.
Take Trenton to the larger hospital or take Trenton to the fire station on the main road near your place.
Do it now.
Do it while you still can.
If you need help, contact me. You know how.
MURT

The sick behavior got him on the news.

Murtaugh, a retired truck driver who lives in a shoddy rickety trailer, made the news again in 2008 with his disturbing behavior, when Casey Anthony’s daughter, Caylee Anthony, vanished in Orlando, and Murtaugh purchased an old news van and began following news crews around – acting like he was a reporter.

In 2009, when five-year-old HaLeigh Cummings vanished from Satsuma, Florida, Murtaugh again was on the scene – involving himself and hanging around Texas EquuSearch.

Murtaugh’s name appears as the author on a chat log where “Murtwitnessonelive” laughed and boasted to raping and murdering six children including Trenton Duckett.

Evidence shows Murtaugh works with a network of psychotic predators who meet on the chat log that appears beside his You Tube Livstreams. Most of the group are believed to be child traffickers who pose as FBI agents and/or other types of feds.

Murtaugh soon turned his angry sights onto an award-winning investigative news reporter from Minnesota named Timothy Charles Holmseth, after Holmseth learned from a legal assistant that child rape pornography had been created of HaLeigh Cummings.

Holmseth was interviewed by the Minneapolis, Minnesota FBI in 2010 at the request of the Jacksonville, Florida FBI.

Holmseth informed local, state and federal law enforcement, including the U.S. Courts, with the names of rogue CIA/FBI operatives that were kidnapping kids and moving them out of the United States through the Ukrainian Embassy in Washington DC.

Holmseth uncovered the Ukraine trafficking operation many years before the Hunter/Joe Biden ‘Laptop From Hell’ scandal broke in the news as Joe Biden ran for President.

The kidnappers were connected to Jeffrey Epstein.

In 2019, Murtaugh became wholly obsessed with Holmseth after he (Holmseth) acquired the assistance of E-Clause Inc., a Florida corporation that does loss prevention for the U.S. Government under the direct consent of U.S. Congress.

Murtaugh was angry because, although Holmseth had been repeatedly arrested and imprisoned in Minnesota for publishing the information that he’d acquired about the child sex trafficking operations, he (Holmseth) narrowly escaped his captors and a very grim fate.

Christopher Hallett, CEO, E-Clause drafted an official Cease and Desist notice on behalf of Holmseth that was served upon law enforcement in Polk County, Minnesota. The notice advised Polk County they were in violation of the Hobb’s Act for repeatedly kidnapping Holmseth under the guise of ‘arrest’. The Hobbs Act, named after US Representative Sam Hobbs (D-AL) and codified at 18 U.S.C. § 1951, is a US federal law enacted in 1946 that provides:

(a) Whoever in any way or degree obstructs, delays, or affects commerce or the movement of any article or commodity in commerce, by robbery or extortion or attempts or conspires to do so, commits, or threatens physical violence to any person or property in furtherance of a plan or purpose to do anything in violation of this section shall be fined under this title or imprisoned not more than twenty years, or both.

In September of 2020, Murtaugh announced he was launching “OPERATION CHAOS” which was a plan to create WANTED/REWARD posters for Holmseth and spread them out across the country with the help of Hillary Clinton’s former bodyguard Craig Sawyer, a former Navy SEAL and Federal Air Marshal, who operates a fraudulent/fake organization called Veterans For Child Rescue (V4CR). 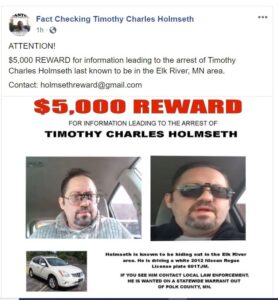 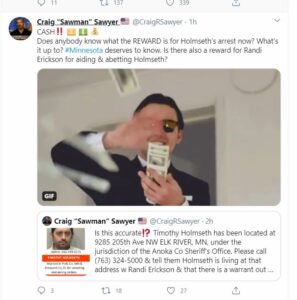 Sawyer hates Holmseth as much as Murtaugh and told Holmseth that his Delta Force “team” is coming to take Holmseth out. Sawyer is furious that he has been exposed as a “pedophile” by a human trafficking survivor named Adrian John Wells, Australia.

VIDEO BELOW (THE TIME IS SET – SIMPLY CLICK AND LISTEN)

In the autumn of 2020, Murtaugh traveled from Florida to Minnesota, and, according to Murtagh, met with the Minneapolis FBI for four hours. This was in addition to meetings Murtaugh said he had with the FBI in Florida and other law enforcement in both Florida and Minnesota.

Murtaugh physically approached U.S. Secret Service agents at a Trump rally in Minnesota and handed them the Wanted poster of Timothy Holmseth that he created with Sawyer.

Murtaugh then, later, went on Livestream and telephoned the U.S. Secret Service to report that Holmseth (a news reporter), several months prior, in June of 2020, had written a story explaining that the publisher he reports for at (www.timothycharlesholmseth.com) received a written a death threat against President Trump.

There was simply no logical explanation for Murtaugh to telephone the Secret Service about a published news story.

However, Murtaugh Livestreamed the call (illegally recorded the call in Florida) and then began encouraging viewers to all call the Secret Service and bring up Holmseth’s name.