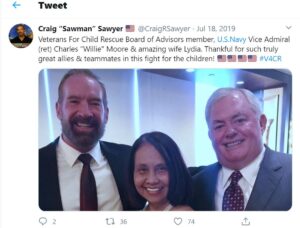 On August 5, 2020, somebody using the name Vice Admiral Charles W. Moore contacted www.timothycharlesholmseth.com and said, “This is Vice Admiral Moore. I am a personal friend of the President, General Milly, and General Flynn. Your fake reporting on our organization must stop now”.

The Admiral Moore contact was made two days after “Craig Sawyer” threatened Holmseth that his “team” was coming to get Holmseth.

Holmseth has received a steady stream of death and rape threats including a threat to have Holmseth’s daughter raped by an animal on an Army base and filmed.

Sawyer said he formed Veterans For Child Rescue in April of 2017 with the “top of the FBI”. KGUN in Tucson reported Sawyer’s team is comprised of FBI, CIA, Navy SEALS, and Delta Force. 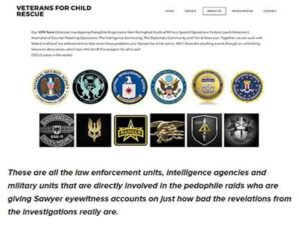 Sawyer has been called a “pedophile” “kid basher” and “human trafficker” by a past victim named Adrian John Wells.