President Donald J. Trump knows the true facts and details of crimes against humanity that are horrors beyond the comprehension of the average person.

The truth about the 2020 election has nothing to do with fraud, per say. The insanity you are observing is driven by enemies of humanity who are being exposed and eradicated, as we speak.

President Trump, and First Lady Melania, simply cannot publicly say what is happening and explain why there is such a maniacal insane do-or-die attempt to stop Trump from entering his second term.

The following information, which was released by the mainstream media on December 22, 2020 is merely the TIP OF THE ICEBERG and PALES IN COMPARISON compared to unique investigative product turned over to Joint Special Operations Command by the Pentagon Pedophile Task Force proving UNSPEAKABLE crimes against humanity including children. 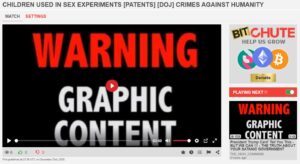