Below has been redacted.

As your records show, in 2009, I was interview by the Minneapolis FBI regarding information I obtained about a convicted sex offender from Hastings, Florida named John Regan who was dressing as a pastor. John Regan was identifying himself to searchers for a missing child named HaLeigh Cummings, as being an “undercover pedophile” for the “FBI” as well as a “CIA agent”.

I am contacting you because XXX XXXXX contacted me from an email at XXXXXX and told me a former Navy SEAL TEAM 6 operator, XXXXXXXX, was going to kidnap me and transport me across State lines. XXXXXX told me he was going to torture and murder me. Another member of their group, James Hill, told me they were going to kidnap my daughter, take her to the Fort Campbell Military Base and have a dog rape her while they film it. I also received a message from retired U.S. Navy Vice Admiral Charles William Moore Jr., who told me he is friends with Chairman of the Joint Chiefs of Staff General Mark Milley, retired General Michael Flynn, and Donald Trump. Moore told me I needed to stop my new reporting on matters of child exploitation and human trafficking. This group also threatened to murder my escrow agent, Randi Lynn Erickson, Minnesota. 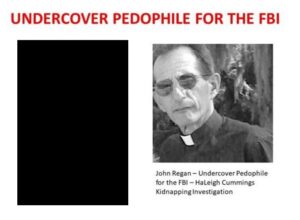 I am requesting the DOJ commence an investigation into this matter immediately.