The Florida man who made the news (see below), shortly after he had to apologize for claiming to possess information about a missing child named Trenton Duckett, is at it again.

Murtaugh made the police report while he was on a You Tube livestream show called THE TASK FORCE FOR TRUTH.

Holmseth has concerns because Murtaugh once wrote Holmseth emails demanding sexual information about his (Holmseth’s) children for a story he was writing.

Murtaugh said he is the owner of a website called www.radionewz.net

Holmseth received questions about his children’s private parts from that website. 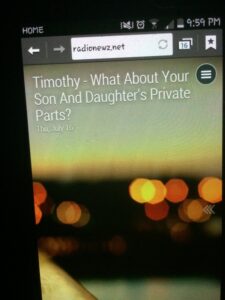 Murtaugh recently suggested during a livestream that he is a federal agent working on an international child sex trafficking operation.

In the chat log below, allegedly authored by Murtaugh, he (Murtaugh) boasts of kidnapping children from malls and raping children to death.