Only a short time later after going live – Sawyer deleted the video.

On November 4, 2019 Sawyer published a photo he directed to the FBI of nine journalists and whistleblowers whom he said “attacked” his organization, and boasted one was already “dead” (Isaac Kappy).

On August 3, 2020 Sawyer threatened Timothy Holmseth (one of the people in Sawyer’s photo of enemies) via interstate electronic consummations in violation of multiple federal laws. 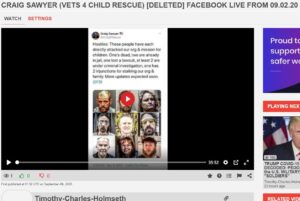