In January 2020 I traveled to Oregon after Straight said he needed my expertise in identifying and unraveling human trafficking operations (such as I did with the CIA FINDERS).

When I arrived, Straight said he believed the girl he was with, Marcella Crandall, was actually “Mary Magdalene” and carried the Jesus Strand. [I KNEW THIS WAS NOT TRUE]. He showed me a photo of “Mary Magdalene” from the Web and insisted Crandall looked just like her.

Straight and Crandall discussed millions of dollars they were going to get via a government fund that rewards ‘whistleblowers’ who turn over evidence. Crandall asked me if that program existed, and I opined that ‘yes’, I think it does. Crandall got a huge grin on her face and said, “Oooooohhhhhh”.

In January 2020, Erickson confronted Straight about Crandall. “Don’t involve yourself with this girl,” Erickson said.

Straight told Erickson, “This girl is placed in those positions for this very purpose. It takes someone very strong-willed. Very dominant. To be able to stand up to what she’s about to face – all of these pedophiles. And I’m telling you I had many visions before even going to California – even knowing who she was – what she looked like – anything – and that’s what I’m going by. Just the spirituality of the whole thing I mean William Moffitt called me about it, I’ve had Rabbi’s call me about it, from clear halfway around the world. I had Indian Shaman call me about this thing”. 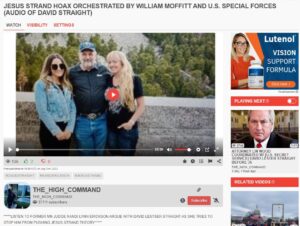