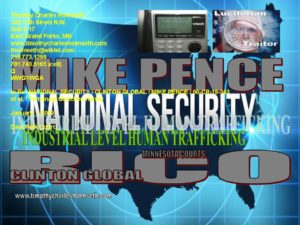 In a January 1, 2019 Memo to a Minnesota Judge, Timothy Charles Holmseth asserts that a cabal of shadow government operatives in the government, law enforcement, and judicial community, connected to Clinton Global and U.S. Vice President Mike Pence, are sex trafficking children in violation of the RICO act and are subject to multiple Presidential Executive Orders regarding international trafficking and crimes against humanity. 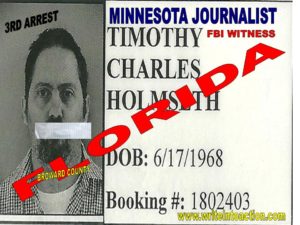 This Memo is being sent to Gretchen Handy, Ronald Galstad, and East Grand Forks City Manager David Murphy and is in no way an attempt to engage in Ex Parte communication.

On December 30, 2018 I mailed a Memo to the Court regarding my public defender Gretchen Handy. I emailed a copy of that Memo to Ms. Handy the same day. I also published it.

In my August 30 Memo I advised the Court that Ms. Handy did not respond to me after I asked her two times what the process was to terminate her. Then – after receiving my August 30 Memo where I went into great detail regarding the Minnesota’s Public Defenders Offices’ ongoing conspiracy with the prosecutor Ronald Galstad to violate my rights, and wherein I addressed Ms. Handy’s ongoing refusal to raise the issue of the violation of my Due Process and Second Amendment rights, Ms. Handy emailed me on December 31.

On December 31, 2018 Ms. Handy said, “Due process and second amendment rights need to be addressed before the Florida court. If you wish to fire me you may want to send an e-mail to the court and even ask that you be allowed to appear on Judge Rasmusson’s next calendar so that you can do so on the record.”

I will now point out a few things:

Ms. Handy did not advise me regarding the process to terminate her until I asked twice, and, featured her behavior in a detailed expositive Memo to the Court. In the Memo I laid out details of a conspiracy by government officials, judicial officers, and law enforcement, to cover-up child sex trafficking. I sent the Memo to Court, Ms. Handy, other interested parties and then published it.

Ms. Handy did not advise me regarding my issues with Due Process and Second Amendment, until I asked her many, many times, and, featured her behavior in a detailed expositive Memo to the Court. In the Memo I laid out details of a conspiracy by government officials, judicial officers, and law enforcement, to cover-up child sex trafficking. I sent the Memo to Court, Ms. Handy, other interested parties and then published it.

The issue of my reporting on, and assisting the FBI with, a child kidnapping investigation began almost a decade ago. In that time, I have been arrested and jailed three times by the same police and prosecutions involving all the same players. During the course of all the legal proceedings that have nearly destroyed my life, the ELEPHANT IN THE ROOM issue of Due Process has NEVER been raised by my public defender(s).

The pattern shows I am required to pull the proverbial fire alarm and set off fireworks before I am to receive the most basic assistance from my lawyer(s). And even then my constitutional rights are not on the table.

At the November 1, 2018 court hearing (when I was arrested upon arrival, handcuffed and shackled, and in a state of shock) Attorney Ronald Galstad asked out loud if the Motion to Dismiss filed by Ms. Handy included “Due Process” and Ms. Handy said ‘no’.

That statement by Mr. Galstad shows the issue of Due Process is heavy on his mind, and, could be raised by my attorney.

I spoke with my trial attorney (and will-be appellate attorney) Steven S. Biss, Virginia, yesterday after I received Ms. Handy’s email. I told him Ms. Handy said Due Process has to be handled in Florida. He said that’s not true.

This case involves operatives and agents of Clinton Global conspiring with like-minded operatives within the Minnesota judicial system, who are all working in tandem, to conceal and protect from prosecution, all of their involvement, in an international child sex trafficking operation that I stumbled upon as a journalist.

I have evidence the Clinton Global operatives are associated with U.S. Vice President Mike Pence in violation of the RICO act.

The evidence I possess puts Clinton Global and Mr. Pence in violation of three Presidential Executive Orders and is a matter of National Security.

I hereby request Gretchen Handy be removed by the Court as my counsel.

If I need to appear in front of Honorable Rasmusson for this I imagine the Administrator will notify me and/or Ms. Handy.