It is important for legitimate law-biding people to protect themselves, and officially detach themselves, from any perceived involvement with any individual or entity that may be engaging in illegal conduct such as fraud or anything else.

I, Timothy Charles Holmseth, observed something was very wrong with E-Clause LLC, Florida, after I learned my Minnesota case had not been “expunged” as E-Clause CEO Chris Hallett publicly stated on Facebook.

Chris Hallett, CEO, E-Clause LLC, announced the warrant issued for Timothy Holmseth no longer existed. “They couldn’t obtain a warrant using sharia law. The warrant and process were not lawful. So we had it all #Expunged,” Hallett said.

CEO Hallett publicly stated he had my case “expunged”. However, I later learned from Russell-Jay: Gould that my case was not expunged. Gould explained that my case in Polk County, Minnesota fell under jurisdiction of 12 miles from the ‘Foreign Vessel in Dry Dock’ which most people believe is a courthouse.

CEO Hallett also told me that he learned from his high-level sources in U.S. Congress and/or the Department of Justice, that “Minnesota admitted” they had no standing to bring the charges against me that they did. When I asked Hallett for verification and documents, he ignored my telephone calls and then blocked my emails.

E-Clause had effectively began using my Minnesota case as a marketing opportunity for E-Clause’s image building and promotion – but refused to provide me any proof of their claims.

That created a very serious moral dilemma for me because E-Clause had filed documents in my case in Polk County, Minnesota, and had successfully slowed down the (foreign) judicial machinery that was grinding me up (because, as I later learned from Gould, the court is a foreign court and those foreign agents do not observe the U.S. Constitution – I was walking onto a foreign ship but didn’t know it).

On November 4, 2019 Kirk Pendergrass went on Field McConnell’s You Tube show The Field Report and announced he (Pendergrass) had arrived in Wisconsin. He announced he would be performing audits on behalf of E-Clause on bad actors in government in Wisconsin, Minnesota, Iowa, and Michigan. He also stated he would be doing interviews with victims of CPS abuse.

Listen to Pendergrass’ statement in it’s entirety at the You Tube link below:

That was the true plan.

Kirk Pendergrass’ (Pendergrass is from Idaho) travel expenses and tools were paid for by a private party (via Randi Erickson) that purchased for him a car, (a total of) two computers, winter clothing (for Wisconsin), gas money etc. to travel to Wisconsin where he (Pendergrass) would then execute a plan to do E-Clause audits in Wisconsin, Minnesota, Iowa, and Michigan; as well as conduct CPS victim interviews which were to be aired on The Field Report.

In the summer of 2019 Pendergrass asked Erickson to buy him him a “house” (she promptly said “no”).

At one point Erickson had to tell Pendergrass “no” when he wanted Erickson to buy him a carton of cigarettes.

Pendergrass admits publicly he told Field McConnell he would be living in his (McConnell’s) home, would be taking care of his dogs while McConnell went on Christmas vacation, and would be conducting multi-state audits for 4-6 months. That was also the agreement Pendergrass had with Erickson.

As we all know – McConnell was snatched off the street in front of his radio studio in Plum City, Wisconsin on November 4, 2019 – the day after Pendergrass arrived.

After McConnell was arrested, Pendergrass and E-Clause proceeded to take over McConnell’s show The Field Report which is a blatant violation of any Fiduciary Duty that existed between E-Clause and McConnell. It is illegal for E-Clause to gain or profit in any way from their Fiduciary relationship with McConnell. E-Clause had/has NO INCENTIVE to secure McConnell’s release from prison because they are benefiting from McConnell’s incarceration. Pendergrass was using McConnell’s show to promote E-Clause and his own program called Kirk’s Law Corner. Kirk’s Law Corner was being simulcasted through The Field Report (airing at the same time) which was causing Pendergrass’ viewership to increase.

Pendergrass attended two of McConnell’s court hearings in Pierce County, Wisconsin but skipped the third hearing. He did NOTHING in Minnesota, Iowa, or Michigan. He did NO CPS victim interviews. At least one CPS victim case was presented to Pendergrass, whom he promptly ignored.

Pendergrass/E-Clause did almost nothing he was supposed to do per his contract with Erickson, while hijacking McConnell’s show and likely profiting via donations and harvested viewers.

Pendergrass also boasted possible access to some kind of “badge” he claimed Chris Hallett could obtain from U.S. Congress and/or DOJ. I have NEVER heard of any such authority that can be created out of nowhere and used to grant arrest powers to a real estate agent license holder (Hallett) and (convicted felon) auto mechanic (Pendergrass).

My Bullshit-ondometer went crazy at these claims by Pendergrass.

To my knowledge Pendergrass has never had any training regarding Fiduciary responsibility and/or Agency Law. I am also not aware that Pendergrass has errors and omissions insurance as required by most licenses authorized by the Executive.

At one point Pendergrass was presented with an opportunity to do an interview with Sarah Westall. Pendergrass said he wasn’t doing interviews with anybody unless it was “Sean Hannity”.  That fact was told to CEO Hallett by Erickson (Erickson is a licensed broker in Florida) and Hallett replied “Oh God”.

Pendergrass exited Wisconsin in late December after only six weeks under cover of darkness – telling nobody. He took with him the vehicle purchased for his use, as well as the computer. He left McConnell’s dogs.

When Randi Erickson confronted Pendergrass about the breach of contract that took place by Pendergrass/E-clause – Pendergrass began to pathologically lie with seemingly sociopathic indifference.

Look at the Facebook statement by Pendergrass and compare it to the text messages below. 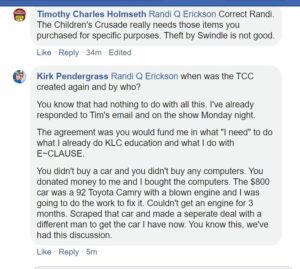 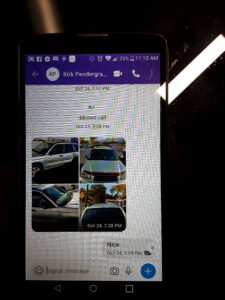 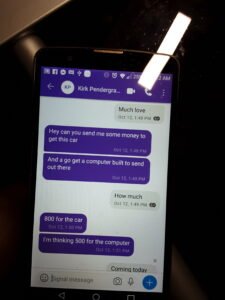 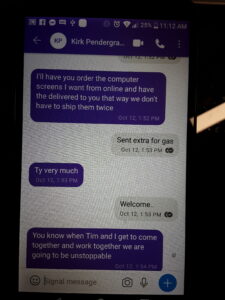 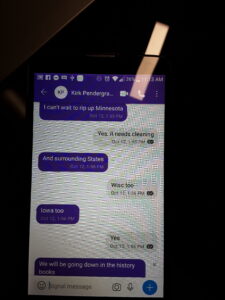 Yesterday, I participated with Erickson in a telephone call with the office of Senator Lindsey Graham and a representative of the Senate Judiciary Committee; as well as a call to Florida Governor Ron DeSantis.

I have NEVER been; and I am presently in NO WAY connected or involved in any criminal conduct or future plans by E-Clause LLC.