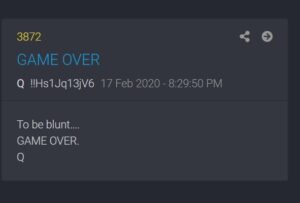 I should make it known to those following the kidnapping of U.S. Marine and Boeing Whistleblower Field McConnell, that Field had begun promoting Q, and even mentioned Q on his radio program which he conducted from his prison cell in Ellsworth, Wisconsin.

The Pentagon Pedophile Task Force arranged for Sgt. Robert Horton (War Castles) to appear on The Field Report to drive awareness to Field’s kidnapping and plight and reach the Q audience.

The man that runs the You Tube channel who goes by the name Eager Beaver refused to allow Sgt. Horton to appear on Field’s show – claiming its his (Eager Beaver’s) channel.

It should also be strongly noted that Eager Beaver does not appear to strongly support Field’s lifetime commitment to his war on child traffickers and pedophiles and was referred to by someone who knows him as “a creepy little fucker”.

Pray for Field McConnell – a lover of Jesus Christ and true American hero.