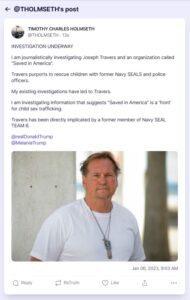 I am journalistically investigating Joseph Travers and an organization called “Saved in America”.

My existing investigations have led to Travers.

I am investigating information that suggests “Saved in America” is a ‘front’ for child sex trafficking.

Travers has been directly implicated by a former member of Navy SEAL TEAM 6.

We have confirmed the public statement made by the former Navy SEAL TEAM 6 member that Travers will be publicly exposed soon.