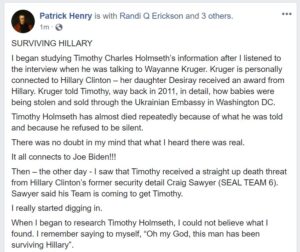 I began studying Timothy Charles Holmseth’s information after I listened to the interview when he was talking to Wayanne Kruger. Kruger is personally connected to Hillary Clinton – her daughter Desiray received an award from Hillary. Kruger told Timothy, way back in 2011, in detail, how babies were being stolen and sold through the Ukrainian Embassy in Washington DC.

Timothy Holmseth has almost died repeatedly because of what he was told and because he refused to be silent.

There was no doubt in my mind that what I heard there was real.

It all connects to Joe Biden!!!

Then – the other day – I saw that Timothy received a straight up death threat from Hillary Clinton’s former security detail Craig Sawyer (SEAL TEAM 6). Sawyer said his Team is coming to get Timothy.

I really started digging in.

When I began to research Timothy Holmseth, I could not believe what I found. I remember saying to myself, “Oh my God, this man has been surviving Hillary”.

I have a good contact high up. I received a comprehensive analysis of Timothy Holmseth from my source in the intelligence community. I was blown away.

Then, the other day I was driving, and the song Cleopatra by the Lumineers came on the radio. In one verse it said, “my flesh it was my currency but I held true”. When I heard that I immediately thought of Timothy. I know he was tortured in prison. I started to cry. https://www.youtube.com/watch?v=aN5s9N_pTUs

I feel like I am morally obligated to tell the world what I know from my source about Timothy Charles Holmseth.

• Timothy Holmseth is, in fact, a news reporter/journalist. He graduated from Northland Community College in Thief River Falls with a degree in Media Communications and Certificate in Broadcasting.

• Timothy Holmseth is, in fact, an award-winning news reporter. He won first place awards with the North Dakota Newspaper Association. He was the Minnesota Government Reporter at the Daily News in Wahpeton, North Dakota. He was considered the best.

• Timothy Holmseth passed an in-depth federal background check performed by the U.S. Department of Agriculture in advance of working alone inside a locked facility with secure areas.

• Timothy Holmseth was interviewed, and deemed a credible witness by the FBI, during their investigation into the disappearance of HaLeigh Cummings in Florida.

• Timothy Holmseth does, in fact, report for a task force. The task force was created in the White House. Evidence obtained by Timothy regarding Jeffrey Epstein’s child procurement operation was taken into the custody of the United States Government including the U.S. Department of Defense and U.S. Department of Justice.

• Timothy Holmseth is, in fact, one man away from President Trump!

• Timothy Holmseth is of very sound mental health. When Timothy became a witness to child sex trafficking, the Deep State court system in Minnesota conspired with Hillary’s operatives to imprison Timothy and accuse him of being mentally unstable. Timothy passed a total of four psyche evals. He has never failed. In fact, he passed with flying colors.

• Timothy Holmseth’s computer was seized during a violent raid by police in East Grand Forks, Minnesota and destroyed. Timothy had back-ups. Timothy’s teenage daughter, who was undressed in the bathroom, was assaulted by a police officer during the raid.

• Timothy Holmseth’s vehicle was broken into, in what appeared to be an attempt to plant narcotics on Timothy. His tires were also slashed.

• Timothy Holmseth’s employers are systemically contacted and harassed anonymously until they fire him. Dominoes Pizza in Grand Forks, North Dakota was the only business that refused to fire Timothy. Dominoes called the courthouse to see if the reports being made about him were true and the courthouse told Dominoes it was all false. Timothy is gang-stalked by Hillary’s operatives to this very day.

• Timothy Holmseth’s 1st and 2nd Amendment was subjected to and violated by three separate injunctions from FAMILY COURTS in STATE OF FLORIDA where he does not live and has no family. The fraudulently obtained court orders were issued on behalf of complainants that had never met Timothy. STATE OF FLORIDA had no jurisdiction over Timothy. The fraudulent orders were issued in effort to stop Timothy from publishing information he obtained as a news reporter. Timothy Holmseth was never arrested or charged for any crime in STATE OF FLORIDA. He was never even accused of a crime! FAMILY COURTS were used to strip him of his rights through conspiracy with STATE OF MINNESOTA. It was all illegal and violated the U.S. Constitution.

• Timothy Holmseth was falsely imprisoned in a private for-profit prison. His captors repeatedly tried to make him sign a confession. He would not. He was tortured. He lost approximately 30 pounds. After he escaped his captors he went to the doctor. X-rays taken at the doctor show he had broken ribs. He never confessed to anything.

• Timothy Holmseth is NOT a felon. He votes and can legally/lawfully own a firearm. Hillary’s operatives falsely claim Timothy is a felon.

• Timothy Holmseth was robbed by Hillary’s operatives who stole personal photos. Hillary’s operatives published a photo of Timothy and his small son that was taken by his daughter. In the photo, Timothy’s 4 year-old son is decked out in girls clothes and make-up. His son and his sister and her friend thought it would be funny to dress the boy up and put make up on him. Timothy heard the kids laughing and joined the laughter when he saw what they did. It was kids having fun. Hillary’s operatives anonymously published the photo and then said Timothy dressed his son up like a girl and had sex with him.

• Timothy Holmseth, many years ago, unable to receive the assistance of an attorney, single handedly filed a Deprivation of Rights lawsuit against City of East Grand Forks in federal court. Timothy Holmseth stood up to multiple law firms and a U.S. Attorney. Timothy presented his oral arguments to the federal judge. He was accompanied by one person who attended to support him – she was a victim of Satanic Ritual Abuse who was sodomized as a small child; locked in a coffin; shipped/trafficked in barges; hung on a cross and witnessed infants beheaded during rituals. She sketched Timothy standing at the podium delivering his oral arguments.

The federal government knew the whole time! Timothy told the feds over and over and over. The recordings and evidence is all in the files. The federal judge SEALED IT!!!

What have we become?

Timothy was standing up for babies.

I’m glad I took the time to do this.

Hillary Clinton and the rest need to be stopped. 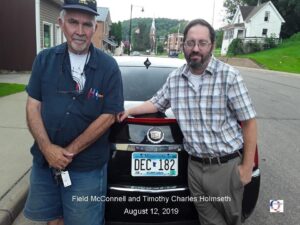 Facebook0Tweet0Pin0
About Timothy Holmseth 810 Articles
Timothy Charles Holmseth is an award winning news reporter and investigative journalist. He is an FBI witness in a national profile kidnapping case. He captured rogue CIA and FBI child traffickers on tape discussing their operations. He has been targeted for a decade. In 2019 Timothy Charles Holmseth became part of the Pentagon Pedophile Task Force. Timothy Holmseth is the only reporter authorized to report original content for the PPTF. There is ONE MAN between Timothy Holmseth and President Trump.