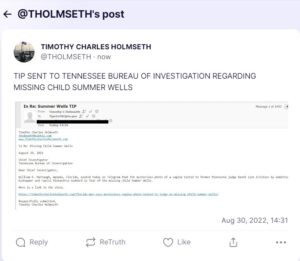 In Re: Missing Child Summer Wells

I just came upon a You Tube video published by William K. Murtaugh on August 28, 2022, at the following link – – –
https://www.youtube.com/watch?v=jh0auNGE1DI

Below the video Murtaugh said, “TIMOTHY CHARLES HOLMSETH AND RANDI LYNN ERICKSON CLAIM TO HAVE AN IMAGE THAT THEY DETERMINE TO BE THE MISSING CHILD SUMMER WELLS. THE FOLLOWING IS A REQUEST FOR INFORMATION ON ANYONE KNOWING WHERE SHE MAY BE. i RECOMMEND THAT AS MANY PEOPLE AS POSSIBLE CALL THE TIP LINE AND INFORM THEM THAT RANDI LYNN ERICKSON AND TIMOTHY CHARLES HOLMSETH HAVE DETERMINED THAT AN IMAGE IN THEIR POSSESSION IS THAT OF SUMMER WELLS”.

On August 23, 2022, I reported, “FORMER MN JUDGE FILES REPORT TO OHIO SHERIFF THAT SHE RECEIVED A PHOTO OF A VAGINA FROM ADMITTED RAPIST (SHERIFF BRINGS UP FBI AND TRUMP)”.

Obviously, Randi Erickson is attempting to have the mysterious photo investigated. Nobody knows the age or identity of the female (except perhaps Alexandria Goddard).

If you review my report to the TBI dated September 9, 2021, published as “Tennessee Bureau of Investigation alerted to organized kidnapping in Summer Wells case” you will easily see that William K. Murtaugh’s recent actions, that include asking the public to carpet bomb the TBI with a PROVABLE lie about innocent targets, is exactly what I described regarding this kidnapping operation and racketeering enterprise.

If William Murtaugh filed any report with the TBI that I ever said the girl in the photo was, in fact, Summer Wells, I want to press charges against Murtaugh for filing a false police report. I will sign an Affidavit of Fact for the TBI.