Is a Denver, Colorado child torture film producer who goes by the name MONTAGRAPH on the Web guilty of domestic terrorism and treason – and along with his accomplices – soon to be arrested by the military?

Let’s start with a question.

Was former FBI Director James Comey the mysterious John Doe #2 who was seen in the Ryder truck with Timothy McVeigh shortly before it exploded in front of the Federal Building in Oklahoma City in 1995?

Before we go any further let’s remember that the attack in Oklahoma City on the Federal Building was an ENEMY ATTACK on the United States.

According to MONTAGRAPH (a.k.a. Steve Quest, Roy Warren Marshall, and (born) Dale Ellis Bennett), a child torture film producer from Colorado who wears a COMCAST jacket during You Tube Livestreams and boasts he can obtain anybody’s telephone number in seconds; and also boasts access to what he calls the “illuminati data base” where highly sensitive data is stored and available at his fingertips – James Comey may be John Doe #2.

Here is a video MONTAGRAPH directed everyone to watch only a few days ago.

There is reason to believe MONTAGRAPH may in fact possess unique (secret) evidence he is not showing the public that James Comey was John Doe #2 riding with Timothy McVeigh.

Where is the evidence?

It’s on the “illuminati data base” he talks about all the time.

MONTAGRAPH’S “illuminati data base” is believed to be a Dark Web site where videos of crimes against humanity, sadistic torture of children, and ritual murders are stored.

Jeffrey Epstein ran an operation similar to the “illuminati data base” that acquired such things to be used for blackmail and extortion.

According to my source Pentagon 1, MONTAGRAPH and his cohort Agent 19 are under federal investigation.

MONTAGRAPH is angry and becoming increasingly paranoid about being under investigation by the Pentagon Pedophile Task Force (PPTF) for his suspected presence at the scene of the JonBenet Ramsey murder in 1996. He is also worried law enforcement is going to require he produce the identity of a little girl tied to a chair who he (verbally) sexually assaulted in a film called Little Piggy and the Umbrella Man that is presently on You Tube.

MONTAGRAPH, who is often drinking hard liquor straight during his Livestreams is clearly operating on a few final nerves and it’s only getting worse. 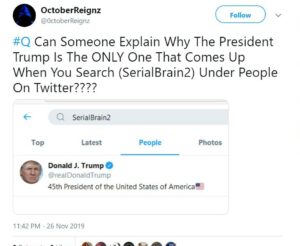 Why was MONTAGRAPH investigating the identity of Serial Brain 2?

The You Tube account called And We Know published a video entitled “SerialBrain2: Ukraine Call Transcripts Decoded. Pt2” that got over 133,000 views in one day. 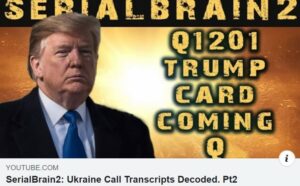 Why is that a problem for MONTAGRAPH?

The viral video featured an audio segment of an interview conducted by Timothy Charles Holmseth (this writer) with Hillary Clinton-Associate-Wayanne Kruger in 2010 wherein Kruger provided Holmseth details of a black-market baby sales operation staging out of Broward County, Florida, and being run through the Ukrainian Embassy in Washington DC. The black-market babies and small children were being trafficked by CIA operatives and rogue doctors through Warsaw.

He’s since taken down most of the videos but they have been retained by the PPTF.

On one occasion MONTAGRAPH boasted that he had President Donald Trump’s cell phone number.

On another occasion MONTAGRAPH announced he’d acquired the telephone number of Vice President Mike Pence. He said he was going to intentionally have Pence’s Secret Service detail dispatched to his home so he could show the agents troves of secret files he possesses.

During one of his paranoid rants MONTAGRAPH made ominous references to content that would link certain people to websites they visited regarding things they wouldn’t want anybody to know about such as ‘trips to Thailand’.

Americans – have you ever, even once in your life, seen somebody do the things this man is doing (and not get arrested?)

In many of his telephone calls MONTAGRAPH complains about Timothy Charles Holmseth (this writer), and on one occasion he called Ellen Lord, undersecretary, Pentagon, and asked her if there is really a Pentagon Pedophile Task Force.

Several years ago, an NSA whistleblower who called himself Kevin Flynn telephoned Timothy Charles Holmseth (yep, me again) and said he’d uncovered the secret CIA server network MONTAGRAPH was using for Pay-Per-View online torture and murder of babies and children. Flynn said the CIA servers were called Snow White and the Seven Dwarfs and they were being shut down because he turned the information over to General Michael Flynn and Admiral Michael Rogers.

O’Bryan told Timothy Holmseth (me) he was the shooter at Waco and claimed to know the most intimate details behind the Waco tragedy.

Shortly after Timothy Holmseth’s videos were re-published by Branson, MONTAGRAPH went on Livestream and began presenting information, including a video, that suggest former FBI Director James Comey was the mysterious John Doe #2 who was seen with Timothy McVeigh.

MONTAGRAPH has publicly stated he is working with figures in Broward County, Florida.

Amidst the War on Terror…

If the ‘Illuminati data base’ MONTAGRAPH talks about contains data files of crimes against humanity and crimes against children, which are being used against U.S. Congress and other officials to paralyze the United States government – he is already guilty of domestic terrorism.

MONTAGRAPH has made it clear he possesses ‘secret’ ‘sensitive’ files. Then – he goes on Live and telephones high level politicians. The politician is automatically implicated (in the public eye) and very intimidated (EVEN IF THEY ARE INNOCENT OF ANY CRIME) by the mere fact MONTAGRAPH called them.

Does MONTAGRAPH, and his colleagues (e.g. BROWARD COUNTY FIGURES), clear use of their ‘Illuminati data base’ as a WEAPON, subject him/them to military arrest for being enemy combatants and/or acting in violation of the laws of war?

E-Clause LLC, is a corporation in Florida that does loss prevention for the United States government under the direct consent of U.S. Congress.

Chris Hallett, CEO, E-Clause, and Kirk Pendergrass, agent, E-Clause, may be inclined to conduct an audit of the entire body of facts set forth herein and report their findings to President Trump.