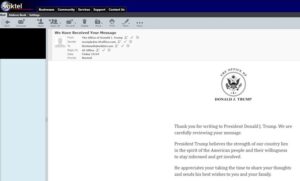 President Trump,
This is to advise you that members of an Arizona corporation called Veterans For Child Rescue Inc. (V4CR) are publicly claiming, in writing, to be closely affiliated with you (President Donald Trump) as well as General Mark Milley, and General Michael Flynn.The facts might give you cause for concern.
FACTS:
On August 5, 2020 Vice Admiral Charles W. Moore used his V4CR account to publish his claimed association with you, Milley, and Flynn on www.timothycharlesholmseth.com and made statements on your behalf.
Former Navy SEAL Craig Randall Sawyer, CEO, V4CR, and members of his [black] operations have stalked, both online and in-person, and, made felonious threats via interstate electronic communications, of murder, kidnapping, rape, bestiality rape, torture, and/or financial ruin, against, me, my children, grandchildren, my family, my friends, and friends of my friends’ friends.
The V4CR threats were made in claimed association with law enforcement, the U.S. Navy, and the U.S. Army in Fort Campbell, Kentucky. Records show that beginning in 2017, Veterans For Child Rescue (which has never, ever rescued a child) published nomenclature, official logos and emblems, and video statements, announcing their vast ‘child rescue’ organization was working with the FBI, CIA, NSA, Department of Homeland Security (DHS), U.S. Customs and Border Patrol, U.S. Military, Utah Attorney General, Texas law enforcement, Arizona law enforcement, Connecticut law enforcement, and other federal, state, and local agencies.
Evidence shows V4CR is a domestic terror group connected to an international crime syndicate.
One V4CR message to www.timothycharlesholmseth.com came from former FBI agent Bob Hamer who has appeared on FOX NEWS and told Oprah he went “undercover” as a “pedophile” to infiltrate NAMBLA. Hamer states he was an international arms dealer with a passport given to him by the “FBI” that was made by the “Chinese”. Bob Hamer appears to be one and the same as pastor “John Regan”- a convicted sex offender from Hastings, Florida who in 2009, claimed he was a CIA agent and an undercover pedophile for the FBI. I reported that information to the FBI in 2009. I was interviewed in 2010 and deemed credible by Minneapolis FBI special agent A.J. Eilerman. Hillary Clinton-associate Wayanne Kruger told me John Regan kidnapped kids, raped them, and trafficked them through the Ukrainian Embassy in Washington DC. Evidence suggests John Regan (Bob Hamer) may be the mysterious “Mr. Reagen” named by child sex abuse and trafficking victim Max Livingston during law enforcement’s investigation into THE (CIA) FINDERS CULT in 1987.
I hope this information is valuable to you.
My liaison to the Presidential task force regarding human trafficking you created has not changed.
Very respectfully yours,
Timothy Charles Holmseth 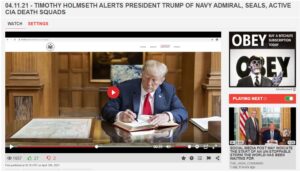