mentioned you in their post·2h

@Timothy_Charles_Holmseth Gaetz Links to Hallett? Where is Neely’s child? Child trafficked from Florida to Minnesota to Wisconsin? Body buried in a Field near plum city? No one was watching the property for months and months. Who’s property will it be found on?? Was a murder weapon buried in Elk River?? Who’s property will the weapon be found on?? Did Brian wake up one night and hear a shovel hitting the ground? Things that go bump in the night….. Who’s DNA will be found at both of the scenes? TCH sure will have some explaining to do and no one will believe him and his wild accusations because no one cares about TCH. Sure will make for crazy headlines though. We are going to take care of the TCH issue once and for all. One anonymous phone call seals TCH’s fate and we plan on torturing for a very long time for maximum pain. Torture is so much fun and my gods will reward me handsomely. Run baby Run baby Run. Who shall we squeeze next? Daughter? Parents? Friend? Helper? Stay Tuned. 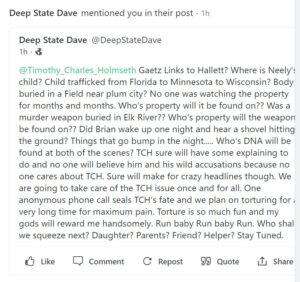