Broward County, Florida and Stearns County, Minnesota are among the worst for child sex trafficking and crimes against children.

I recently spoke with my source with the U.S. Pentagon who I will refer to as Pentagon 1.

“We got to find more (children). It’s up to the people to bring evidence,” Pentagon 1 said.

Stearns County, Minnesota is where Jacob Wetterling lived until he was kidnapped off the side of the road on October 22, 1989.

The public was lied to about Jacob’s kidnapping. Evidence pointing to Jacob’s real abductors and his ultimate murder by Satanic ritual is in the hands of investigators at the Pentagon. According to an eye-witness who was present during Jacob’s murder; Jacob’s father Jerry Wetterling participated in the boys murder.

“The Pentagon has the Wetterling evidence,” Pentagon 1 said.

For more by Timothy Charles Holmseth on the Jacob Wetterling case click here. 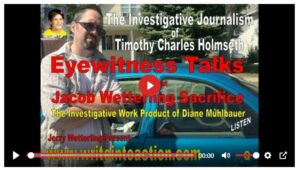