If Deep State actors can switch votes in a U.S. Presidential election – can they switch shooters in the murder investigation of a U.S. Congressional Oversight Defense Contractor who is actively exposing the existence of an un-constitutional fourth pillar of government that is kidnapping American children at the industrial level?

Focus on the concept of children – and keep on reading.

Have you ever, even once, heard of the U.S. Secret Service getting involved in a manhunt for a mother who went somewhere with her kids, in a family situation that amounted to nothing more than a county level custodial interference issue between the mother, and her children’s’ grandmother?

Believe it or not…

It allegedly happened once (in the history of all time).

It was in March of 2020 in the state of Kentucky – and it involved a mother who was being assisted by a Congressional Oversight Defense Contractor who was a loss prevention specialist for the U.S. Government, and, was exposing Emoluments Violations by entities and bad actors within the government that were kidnapping children.

The mother that supposedly captured the interest of the U.S. Secret Service in Kentucky was Neely Petrie-Blanchard, 33 (now 34) and on November 15, 2020, she found herself accused of murdering Christopher Hallett, the defense contractor from Marion County, Florida who was helping her.

On November 15, 2020 Christopher Hallett, CEO, E~Clause LLC, was a Congressional Oversight Defense Contractor who investigated Emolument Violations, and performed loss prevention audits for U.S. Congress, when he was shot dead in the back in his Marion County, Florida home.

According to a Probable Cause affidavit, at 9 PM (sharp) the Marion County Sheriff’s Office (MCSO) received a call regarding shots fired at Hallett’s address. The call was made by Shannon Mutter-Tanis, a professional associate of Hallett’s company E~Clause who was at the murder scene. Tanis told law enforcement she and her minor daughter heard a loud boom in the other room, went to investigate, and saw Neely Petrie-Blanchard, a corporate officer of E~Clause, standing over Hallett with a gun.

Tanis told police she heard Blanchard say something to Hallett about failing to get her kids back; that Blanchard shot him a few more times, and then left the scene in a vehicle.

On March 26, 2020 we reported Why was the U.S. Secret Service involved in county level custody matter in Kentucky? – And why did only one news outlet report it?

It is re-published below as it was published on that date. 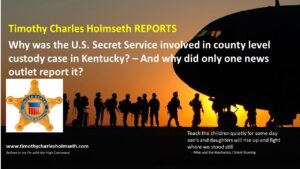 Since when does the United States Secret Service get involved in a county level custody matter? And why does only one news outlet quote the County Sheriff regarding Secret Service involvement?

It’s a question that will grow more intense until it is answered.

Early this morning an Amber Alert for two little girls in Kentucky was cancelled after they were found safe with their mother, Neely Blanchard.

Blanchard’s license plates read ECLAUSE, which is a Florida LLC that does loss prevention for the United State government.

Blanchard was arrested for kidnapping.

Those who were reading intently and expecting to see the huge story that would certainly accompany that headline were horribly let down.

The widely covered Amber Alert story was regarding Neely Blanchard, who reportedly, went someplace with her two daughters while their grandmother, who has custody of the two minor girls, was running some errands.

However, there does not appear to be any news reporting that explains why an emergency existed or how the wheels of law enforcement started turning in the case. In fact, all news reporting on the matter seems very lackluster and offers precious little insight as to why the Amber Alert was issued in the first place. Mainstream news coverage does not even state who called the police?

Which leads to the ultra-bizarre fact that the U.S. Secret Service got involved.

“Twin girls have been returned to their home after a long day of hard work by law enforcement that ended with an Amber Alert being issued and help by the United States Secret Service,” OJ Stapleton reported.

“When the Amber Alert went out, we started getting tons of good information,” Stratton said. “We had a good idea where they were and then the Secret Service got involved and used their resources to track her through her phone and social media.”

Trained professional news reporters absolutely know the U.S. Secret Service dynamic to the story dominates all subject matter and would/should be in every headline and lead across the board.

It is very strange only one news outlet knew about the Secret Service, considering they quoted the County Sheriff.

There is much more to this case than is meeting the eye.

Chris Hallett, CEO, E-Clause, Florida, issued a formal response today after his client, Neely Blanchard, was arrested. According to Hallett, E-Clause does loss prevention for the United States government under direct consent of U.S. Congress.

See video below for Hallett’s statement. 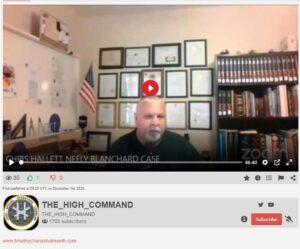