Photographic evidence submitted to the Indiana State Police pertaining to the Delphi double murder investigation may lead to new suspects.

On August 13, 2022, Alexandria Goddard, Martins Ferry, Ohio, texted (unsolicited) a photograph of a vagina to a former judge from Minnesota named Randi Lynn Erickson. The photo did not show the small female’s face. There was no pubic hair, and the hips were that of a petite girl. There was strange bruising, and the image may have been a corpse laying in the dirt.

The timeline of events that followed the transmission of that pornographic images may speak to the reason the Prosecutor in the Delphi case requested the Probable Cause affidavit be sealed, and why the investigation is considered ongoing.

So… the STATE OF OHIO for some inexplicable reason chose to fabricate criminal charges against innocent out-of-state people as they defended Goddard who was transmitting pornography.

But a close examination of the timeline will tell a very compelling story that leads to Delphi, Indiana.

Erickson and Holmseth were scheduled for “Criminal Arraignment” on September 21, 2022, in Belmont County, Ohio – PAY CLOSE ATTENTION TO THAT DATE.

Erickson contacted law enforcement in Belmont County, Ohio but neither the Sheriff’s office nor the Martins Ferry Police Department would take Erickson’s report regarding the image. Erickson and Holmseth then took the photo to the Tennessee Bureau of Investigation (TBI) in Nashville, per a connection to Levi H. Page, Dover, Tennessee. The image was presented to two TBI agents.

On September 17, 2022, Goddard appeared on From The Desk Of Murtwitnessonelive on You Tube and talked about the vagina photo she texted to Erickson. Goddard became obnoxious and said she demanded a “vagina line-up” from the Belmont County Prosecutor to establish whether or not the vagina was hers, or not. 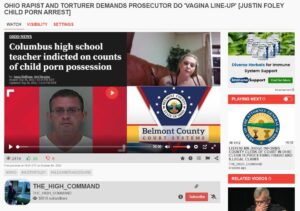 Goddard said Murtaugh had a copy of the image.

Goddard told Murtaugh during the program that the court date scheduled for Erickson and Holmseth of September 21, 2022, had been continued.

On September 21, 2022, (THE DAY OF ERICKSON AND HOLMSETH SCHEDULED ARRAIGNMENT) law enforcement in Ohio announced the arrest of Justin Foley, a schoolteacher in Columbus, on charges of child pornography. They had received an anonymous tip submitted to the National Center for Missing and Exploited Children on August 16, 2022 (the EXACT SAME DAY THE STATE OF OHIO falsely charged Erickson and Holmseth with stalking Goddard).

On Friday, October 28, 2022, news began to circulate that an arrest had been made in the Delphi double-murder of Abigail Williams and Liberty German in 2017. That same day, Goddard and Levi Page appeared on Websleuths You Tube program to Discuss the Delphi murder development. Goddard proactively speculated that perhaps Abigail and Liberty’s murders were recorded for a “snuff” film.

On October 31, 2022, Holmseth announced he submitted evidence regarding a “snuff” film based upon the statements Goddard made. Holmseth submitted the evidence, including the image of the small female’s vagina, to Douglas G. Carter, superintendent, Indiana State Police.

“It would surely be responsible to identify the small female in the pornographic image (that may be a dead little girl) and trace the origins of the image. Of course – you could receive that information from Alexandria Goddard because she is the person that transferred the image via interstate electronic communications,” Holmseth said.

On October 31, 2022, Murtaugh went Live on his You Tube program and was irate at Holmseth.

Murtaugh was furious that Holmseth submitted the photo to the Delphi investigators.

Murtaugh expressed his anger and dismay that the Indiana investigators would now surely have to investigate the vagina photograph and the evidence would have to be turned over to the Defense during discovery.

Murtaugh had not been worried about Belmont County investigating the photo, but he changed his attitude when it was submitted to Indiana.

It was notable that the FBI, which had been very active in the Delphi investigation, was not represented or present at the October 31, 2022, press conference regarding the arrest of Richard Allen.

Murtaugh angrily admitted he (Murtaugh) was now a suspect in the Delphi case and expected to be interviewed by law enforcement.

Evidence shows Murtaugh became irate on October 31, 2022, when he learned it had been turned over to investigators in the Delphi murder case.

It now appears Murtaugh has removed videos from his You Tube channel, including the September 19, 2022, video where Goddard went on a psychotic rant and demanded a “vagina line-up” from the Belmont County Prosecutor.