In 2009, I began to uncover an international child sex trafficking operation connected to Jeffrey Epstein that led to a black-market baby sales operation being run through the Ukrainian Embassy in Washington DC. 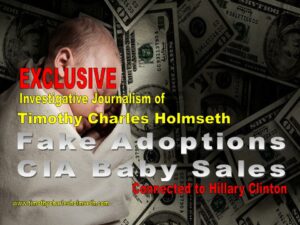 I was already an award-winning news reporter with the North Dakota Newspaper Association and my independent project found me being interviewed by the Minneapolis FBI regarding my work product of recorded interviews – I was deemed a credible witness. I had long since been granted sole physical custody of my five-year-old daughter by a Minnesota court and raised her alone to adulthood. I also passed an extensive background check by the Department of Agriculture to enter the secure areas of a federal facility.

I was a good guy.

But I knew way too much about the bad guys.

The vast network of pedophiles I’d begun to uncover was spread all over the United States including my home state of Minnesota.

I was threatened with death – ran off the road – had my tires slashed – and found someone broke into my car to plants narcotics on me but were interrupted – and falsely arrested.

For ten years they terrorized me.

In February of 2018 I found myself being kidnapped by corporate policy enforcers in East Grand Forks, Minnesota. I was criminally charged for ‘publishing’ already public court files.

Yep – the Epstein and Ukraine thing was coming out in the international news and they needed to get rid of me.

One tactic that was used quite often by the foreign agents and organized criminals that kidnapped me was to have somebody contact me and try to become close to me.

Here is an example of one such call (below) – the caller tries to establish a relationship with me – names East Grand Forks police and EGF City Attorney Ronald Galstad – and tries to set up code names etc. 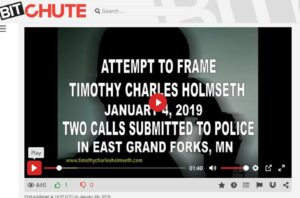 Here is another (below) where a man from Florida tries to con me into logging into a website. 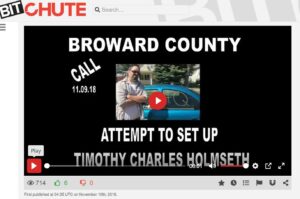 And here’s another where a convicted pedophile brought up JEFFREY EPSTEIN – he was used to make contact me and try to establish a record of communications. 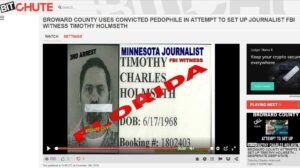 As I prepared to go to trial, I was approached by some people who I believed were Patriots and wanted to help me because I was targeted by the Beast system for protecting children.

One of those people was Tom Morrissey, 60, Gatzke, Minnesota. He attended all my hearings and praised me non-stop.

As my ordeal dragged on, I received assistance from a Task Force connected to the U.S. Pentagon that secured my evidence and provided me with legal counsel. I learned we are under Martial Law and I had been kidnapped; the (fake) court of foreign agents was actually a foreign ship at dry dock had no jurisdiction over me beyond 12 miles of the ‘ship’.

During my investigative journalism over that decade I learned a lot about local problems and cover-ups of sex abuse of children.

So, you might imagine my dismay when I learned Tom Morrissey was a very active member of the Diocese of Crookston which had since been in the national news because of their notorious pedophile priest.

Long and short of the story…

During my ordeal with the fake court in Crookston, someone who was not my legal counsel began to make very strong efforts to steer my defense and repeatedly contacted me and attempted to dissuade me from following through with my calculated defense strategy that based upon the Constitution of the United States of America – pushing me to do things against the advice of Pentagon level law experts.

Tom Morrissey is no longer praising me for my decade of work against organized child trafficking and crimes against humanity.

Tom Morrissey took to Facebook with a handful of others and they have begun butchering me and members of the Task Force (highly accomplished people of the HIGHEST [White House] caliber) with defamation – calling us all frauds.

Not to the investigative journalist that exposed the Ukrainian Embassy black market baby corridor.

When it comes to these matters – I can see the wind.

Here’s something Tom Morrissey posted on Facebook (when he isn’t busy trashing me and the Task Force) after seeing a photo of a goofy woman who had used a pair of male brief underwear as a make-shift shirt. 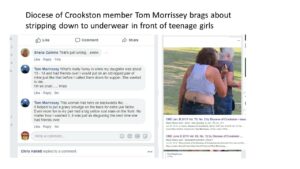 “What’s really funny is when my daughter was about 13-14 and had friends over I would put on an old ripped pair just like that before I called them down for supper. She wanted to die…I’m so cruel lmao,” Morrissey said.

“This woman has hers on backwards tho…..it helped to put a gravy smudge on the back for extra yuk factor. Even more fun is my pair had a big yellow rust stain on the front. No matter how I washed it, it was just as disgusting the next time she had her friends over,” Morrissey said.

Facebook0Tweet0Pin0
About Timothy Holmseth 725 Articles
Timothy Charles Holmseth is an award winning news reporter and investigative journalist. He is an FBI witness in a national profile kidnapping case. He captured rogue CIA and FBI child traffickers on tape discussing their operations. He has been targeted for a decade. In 2019 Timothy Charles Holmseth became part of the Pentagon Pedophile Task Force. Timothy Holmseth is the only reporter authorized to report original content for the PPTF. There is ONE MAN between Timothy Holmseth and President Trump.