DONALD TRUMP HAS THE CANNIBALISM EVIDENCE IMPLICATING HILLARY AND OTHER PRESIDENTS?

I am reporting that today, a screenshot of a partial portion of a header of a “CRIMINAL COMPLAINT” appeared on Telegram. 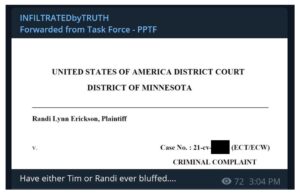 The Plaintiff on the “CRIMINAL COMPLAINT” was Randi Lynn Erickson. The headers said, “UNITED STATES OF AMERICA DISTRICT COURT – DISTRICT OF MINNESOTA”.

The posted portion of the “CRIMINAL COMPLAINT” does not show any details regarding what the Complaint entails.

I have identified the case in the U.S. Court contains statements from Droel Law Firm (TX-MN).

If the “CRIMINAL COMPLAINT” that appeared online today was delivered to Donald J. Trump’s attorney Peter Ticktin, I may report that in the future.