Were 2,100 children rescued by U.S. Marines from underground bases in California? Is there evidence to show that a man who produced a child torture-porn film in 2010, was at the scene of the JonBenet Ramsey murder in 1996? Did President Trump recently request loss prevention specialists E-Clause LCC to conduct video interviews with victims of CPS kidnappings so he can hear the stories?

According to the news reporting of Timothy Charles Holmseth for the Pentagon Pedophile Task Force all those things have been accurately reported upon.

According to a fake Donald Trump tweet – it’s all lies. 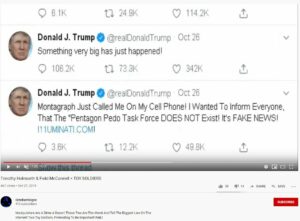 On October 27, 2019 a You Tube channel called October Reignz published a video that featured what appeared to be a Tweet by President Donald Trump that said, “MONTAGRAPH JUST CALLED ME ON MY CELL PHONE! I WANTED TO INFORM EVERYONE THAT THE Pentagon Pedo Task Force DOES NOT exist! It’s FAKE NEWS! ILLUMINATI.COM!

MONTAGRAPH is the You Tube name of a Colorado man that has become the center of a national controversy surrounding his true identity.

Why is his name important?

Holmseth also reported that MONTAGRAPH produced a film called Little Piggy and the Umbrella Man that showed what appeared to be a young female child tied to a chair in a dungeon type setting with a pig snout on her face where she was sexually abused by MONTAGRAPH who told her he knows she likes it when strange man get on top of her and pound her like the little cunt she is. He made her oink and squeal like a pig and at the end of the film there is heard a gunshot.

MONTAGRAPH admits he is the man in the video with the little girl but insists the girl was a 35-year-old woman at the time named Vickie Miller. “The woman in Little Piggy and the Umbrella Man – her name is Vickie Miller she was born in 1975 – she’s alive and well in Denver just down the street,” he said yesterday.

There has never been an investigation by law enforcement to determine the identity of the little girl in the video.

MONTAGRAPH also insists he was never named Dale Ellis Bennet. Interestingly – he says law enforcement questioned a man named Dale Bennett about the JonBenet Ramsey murder – while noting the man the police questioned looked nothing like himself.

MONTAGRAPH says he was born Roy Warren Marshall and subsequently changed his name to Steve Quest.

MONTAGRAPH warned Timothy Holmseth in a livestream video yesterday that he will regret trying to expose him. “It’s going to become the biggest nightmare of all your life,” MONTAGRAPH said.

“Let’s go ahead and give Mr. Biden a call should we,” MONTAGRAPH said, before ringing the cell phone number of Joe Biden but getting no answer.

MONTAGRAPH boasts having the telephone numbers of the CEO’s of Google and You Tube and recently called Ellen Lord, Under Secretary of Defense, U.S. Pentagon to ask her about the Pentagon Pedophile Task Force. On a separate occasion he claimed to be associated with Vice President Mike Pence and military generals such as David Berger.

“Mr. Holmseth we are working on you right now. We will get your location. Bet on it. We sure will. You have no idea who my allies are. You don’t even have a clue. You think you do but you don’t. And we’re going to get you,” MONTAGRAPH said.

“Mr. Holmseth when you made mention that I’m well connected that’s a true statement you just don’t even know. You can’t even fathom how truly connected I really am,” MONTAGRAPH said.

MONTAGRAPH repeatedly expressed his anger that Timothy Holmseth claims he is reporting for the Pentagon Pedophile Task Force. “2,100 children were not saved,” he said, adding the Task Force does not exist.

“You have Roseanne Barr burping out of her mouth giving some sort of acknowledgement to an agency that doesn’t even exist – how irresponsible was that,” MONTAGRAPH said.

“Roseanne Barr is talking out of her ass,” he said.

During the October 27 rant MONTAGRAPH returned often to the subject of a police report Timothy Holmseth recently announced is going to be filed to law enforcement by the Pentagon Pedophile Task Force and The Children’s Crusade.

“You know how embarrassing it’s going to be when you make false statements to the Boulder Police Department? I’m going to turn right back around grab the affidavit and file a formal criminal – not civil – a formal criminal complaint against you or anybody else that plays these games,” MONTAGRAPH said.

During his livestream rant MONTAGRAPH talked about the Rockefeller family being afraid of him. He claimed very close ties to ABC and said his step-dad worked with Sam Donaldson.

“You keep pushing me Mr. Holmseth you know what I’m going to do? I’m going to call up Donald Trump I swear I will. Call him right up on his cell phone. I know it’s going to be intercepted by the Secret Service I know – but if you just push me enough and I’ll do that – I will contact Donald Trump live. Right here on his cell number,” MONTAGRAPH said.

MONTAGRAPH insists he is entirely confident that all his enemies are going to be located by his high-level contacts, sued, and put in jail.

“I don’t fear any of you people – none of you,” MONTAGRAPH said.

“Matter a fact – you know – an honest statement – for somebody to ‘ghost out’ for a third time would be really difficult – I’m always up for a challenge – so I can POOF – disappear – just that quick – I disappear you’d never know where I was – because I know how to manipulate databases buddy boy,” MONTAGRAPH said.

The Pentagon Pedophile Task Force and The Children’s Crusade is preparing information and evidence for State and Federal law enforcement regarding “Dale Ellis Bennett”.

The information will also be made available to the U.S. Military.

Timothy Charles Holmseth is the only news reporter authorized to write original content for the Pentagon Pedophile Task Force.

There is one man between Timothy Charles Holmseth and President Trump.