Elon Musk’s life is in far more danger than most could ever even begin to imagine.

Federal court records filed in Tennessee reveal the recent highly publicized stalking event of Musk is a far more dangerous and complex situation than being reported.

Musk posted a video on Wednesday of a masked man stalking a vehicle in Los Angeles, which the predator mistakenly believed was occupied by Musk. “Criticizing me all day long is totally fine, but doxxing my real-time location and endangering my family is not,” Musk said.

Musk said, “Legal action is being taken against Sweeney & organizations who supported harm to my family”.

But Complaints filed in both Minnesota and Tennessee federal courts paint a much different picture of the events surrounding Musk.

The most recent filing, which is the RICO action Holmseth v. Page et al – U.S. Court – Tennessee – 3:22-cv-00912 reveals Musk has been a target for quite some time.

The only thing that has changed is Musk’s acquisition of Twitter and the threats are escalating.

The targeting of Musk began with a law firm in Texas-Minnesota (Droel) connected to former members of “SEAL TEAM 6”.

The Amended Complaint in the Holmseth case began with the following plain and simple statement.

“The Defendants are organized and using a former FBI agent and SEAL TEAM 6 in attempt to locate and murder me for my work as a news reporter and journalist reporting about child trafficking, human trafficking, crimes against humanity and cannibalism,” the filing by Timothy Charles Holmseth said. 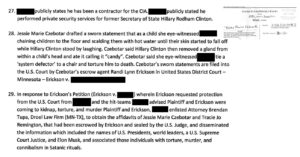 The stalking of Musk is connected to Jessie Marie Czebotar, a federal witness who said when she was a child, she watched a former Navy SEAL scald a child with boiling water, and then Hillary Clinton pulled a gland right out of the living child’s head and ate it calling it “candy”.

On December 14, 2022, Czebotar appeared on a You Tube program called Aquarius Rising Africa II where she discussed what is happening with Elon.

“Why do they push that narrative. Why? You have to ask why do they push it? Because, they know Elon has went through abuse as a child. Through not only the U.S. Military, but who’s the main group? It’s the Luciferian Brotherhood. So as a hierarchy bloodline child growing up in that system what were things that he witnessed, and he went through,” Czebotar said.

During the Aquarius Rising interview, Czebotar said Droel Law Firm released sealed affidavits to the public so the witnesses could be targeted. Czebotar explained that all the whistleblowers are being hunted down by the Luciferian Brotherhood.

“They’ve attempted to, you know, destroy prevent those affidavits of multiple witnesses going forward. Literally they unlawfully, get this, it is unlawful, it’s against the law for anybody to break notary and affidavit seals. They broke the seals in the Minnesota court. What did they do then? They took copies of those affidavits – they began to release information publicly – Droel Law Firm out of Texas was the first. Their lawyer began to release some of that publicly and then you know it was taken from there where it was made public on several You Tube channels. And with what? With the attempt to discredit. But then they took it further. They totally denied due process to those to the information that may made public, and they began to literally go through affidavits, calling, calling, perpetrators of crimes against children they called them to notify them ‘are you aware that Jessie Marie Czebotar has named you in case involving Satanic ritual,” Czebotar said.