The mysterious ‘phantom case’ against former U.S. Marine and 911 Whistleblower Field McConnell is on hold for now after a court hearing in Ellsworth, Wisconsin today – a court hearing where nobody stood when told to “all rise”. 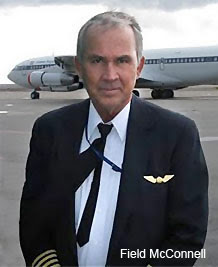 The State of Wisconsin’s attempts to extradite McConnell to Broward County, Florida to face three felony counts that were manufactured without a Grand Jury is on hold after the State’s prosecutor requested an extension.

“The State of Florida, through the Broward County State’s Attorney’s Office, is diligently working on obtaining the Governor’s Warrant, but requires more time to assemble the necessary documents for extradition,” said Assistant District Attorney David Olson, through a written Motion.

Olson reportedly did not appear in person and a female attorney arrived in his place – 40 minutes late.

According to a member of the Pentagon Pedophile Task Force the female State attorney told Judge Joseph D. Boles she had received a ‘Governor’s letter’ supporting her argument. Boles acknowledged the letter and stated it was in the court file.

Field McConnell, 70, who has been in jail for approximately a month with no bail, appeared by video from the jail and made it clear he has been kidnapped and is being held against his will. He made it clear for the record that there shall be no “presumptions” or “assumptions” of anything.

“I went into the Clerk of Court in Pierce County before the court hearing and purchased all documents on the case. I bought everything that was in the record. There was no Governor’s letter. There was no Affidavit of Support for the Warrant. Nothing,” the Task Force member said.

Exhaustive efforts were made by the Pentagon Pedophile Task Force, including assistance and participation from the American public, to locate the criminal case using the number that was hand written on the suspicious looking Arrest Warrant for McConnell, but no case whatsoever could be located in the Broward County, Florida Clerk of Courts system.

According to Chris Hallett, CEO, E-Clause LLC, Florida, who does loss prevention for the government of the United States of America under direct consent of U.S. Congress, the Florida court order was fraudulently obtained through fraud upon the court and constitutes emoluments violations.

McConnell, who hosts the online radio program The Field Report, came under fire by Broward County, Florida after he began reporting about child sex trafficking staging out of Florida that involved babies and children that were being moved through the Ukrainian Embassy in Washington DC.

McConnell had just begun broadcasting reports for the Pentagon Pedophile Task Force and was preparing to air real victims stories of CPS kidnappings which was requested by President Donald Trump – McConnell’s abrupt arrest put the CPS stories on hold.

Other observations by the Task Force: