President Donald Trump shocked the world when he defeated Hillary Clinton in the 2016 presidential election, and thus, defeated the forces of evil that were preparing to implement Lucifer’s New World Order.

It had already been done.

Stay with me here…

I reported that important documents were mailed to Field McConnell by Russell-Jay: Gould, Postmaster of the World, and received by Pierce County jail employees, who, suspiciously re-routed the documents back out of the jail without ever physically giving them to McConnell.

However, as I reported, the documents were physically returned and placed back into the hands of Pierce County, Wisconsin Sheriff Nancy Hove.

The documents begin and read in part:

Wait a minute, you say.

Who is Russell-Jay: Gould and what is this Postmaster of the World stuff? 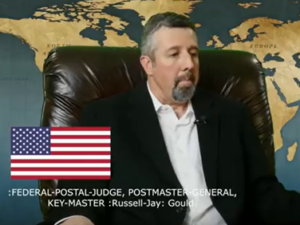 In short, Russell-Jay: Gould possesses the Title 4 flag of the United States of America and the land of the court is literally his land.

“The year 1999 was an event horizon year for the United State and the entire planet because it was the end of third and final bankruptcy for the United States, and we were going to be surrendered back over to Great Britain because we couldn’t pay the debt,” Horton said.

“But – they NEVER told the American people about any of it,” Horton said.

Horton explains how “Lucifer’s piggy bank” was created by New World Order extremists working for Lucifer which included evil men such as George Bush Sr. who kept it filled with CIA black-op money that came in from the biggest human trafficking and drug trafficking operation in the world.

After the planned fall of America – the New World Order was going to be launched out Washington DC.

“The Washington DC postal location was left open to capture on November 2, 1999 for 18 days. The Crown had to vacate the position for 18 days. In 1999 the U.S. Constitution had come to an end. It was closed out with the end of the third and final bankruptcy. They were about ready to surrender the United States back over to Great Britain.

“The entire system is based in mathematical certifiable grammar that has its own elemental chart and periodic tables that create an infinity loop (figure 8) validating itself forward and backward,” Horton aid.

Essentially, the entire world had been under a spell that involved grammar fraud which is how the evil system of courts constantly ran right over the top of the truth. The ‘Now-time’ quantum grammatical construct’ created a system based upon truth.

“Knowing what these men had at their fingertips – all these men needed was the right time and place in history to launch this thing and take the greatest leap of faith ever taken by any two gentlemen ever recorded in the history of this planet,” Horton said.

“Once this things was all set up – the books that they had syntaxxed (that) they had filed with the Vatican and the NSA and several other locations on planet earth and the Vatican had been studying it for five years prior to what had eventually took place in 1999. Russell-Jay: Gould with the help of David-Wynn: Miller in 1999 saw the end of third and final bankruptcy coming and Russell knowing what was about to take place, he ran down to the Pentagon and asked the Pentagon if they had copyright and patent on the Title 4 flag. Knowing that it didn’t matter if they did or they didn’t the contract would have been found to be in grammatical fraud so he re-wrote the copyright and patent for the Title 4 flag for the United States because it was about to be surrendered back over to Great Britain along with the Country at the end of the third and final bankruptcy,” Horton said.

“So, he [Gould] takes off up to the Pentagon with Title 4 flag in tow and legs the whole government system in and there at the United Nations he was declared a sovereign,” Horton said.

Think about that, folks.

“In the process he had just taken down the entire old Monarch system. Because once they re-established those old Masonic books, they had to re-substantiate all of them in a quantum grammar construct thereby disqualifying the old system completely from their bloodlines on. And in that effort set this entire global government system up for the world. Russ then turns back around and during the 18 day vacancy that that Post Office was open that that King had to vacate via international banking law for 18 days – Russell legs back in down here at the Post Office in Washington DC taking tactical command and control of the United States and Canada because that Post Office has always been attached to the DC location. And in doing so he just brought to an end the New World Order effort to surrender the United States back over to the Crown to utilize the United Nations to install a global tax because no one has a charter to exist anymore as a corporation under his authority. Everything has been disqualified. It’s over,” Horton said.

“So prior to 1999 Russell-Jay: Gould had re-written a new U.S. Constitution, a Bill of Rights, Declaration of Independence, he had re-substantiated the charter for all federal municipalities, he had captured the flag for the Army the Navy the Air Force the Marines and the Coast Guard and re-substantiated the entire construct in a quantum global manner. Thereby in 1999 when he moved into the Washington DC postal location taking tactical command and control of the United States and the rest of the North American continent the New World Order and the Crown didn’t have authorization to send our military to war for them after 911 had occurred because they didn’t have the authorization to do so – they had been disqualified – it was over,” Horton said.

Under this true and correct system the Federal reserve did/does not have authorization to print money for the United States and the IRS is kicked out of the country.

“The land of the court is literally their land,” Horton said.

Russell went around the world and sent up his system

When Gould returned from his trip around the world setting up the system, the 5-Star Trust (CIA) guys grabbed him – Bush and the boys “literally beat the shit out of this guy in effort to get him to surrender that flag,” Horton said.

They swept it under rug – they are still trying to take over – then they will implement the Mark of the Beast.

It’s not an accident the documents were intercepted by New World Order loyalists in Pierce County, Wisconsin and the papers didn’t make it to Field McConnell.

Although most don’t know it our nation is under Martial Law and the courts are closed.

Field McConnell is not really in jail (as it appears to the average person), rather, he is cargo on a foreign vessel in dry dock.

The documents Gould mailed to McConnell are called Claims of a Live-Life.

“There are no legal papers because legal is disqualified because of the Martial Law. So, I file my paperwork as Canteen. Because Canteen can be carried by soldiers when you’re in a Martial Law situation, or, be used for the civilian sector. So, I would file what you would call a CANTEEN-TREATY right because you have to realize that you are in a war theater. Though you’ve not been told the lingo is different,” Gould said.

“Everything is a mechanical application of movement. What I [will] do is come in and rearrange Field or whoever is having the difficulties (Timothy Charles Holmseth) – arrange their usury on their credentials to transport themselves – once you do that then you can get a foundation to where you can put up a stance and now navigate yourself off of their foreign vessel in dry dock,” Gould said.

“The subject matter is a bad matter, right. It’s a controversial matter because you’re exposing a lot of bad habits and a lot of bad thinking that’s going on there. But I would highly suggest because the civil venue is closed to go to the U.S. Military because of the Martial Law. What I mean by that is in Minnesota; in Florida, and in Wisconsin in all Governors offices on top of the State flag stand is the spear – the spier – during times of contract which is the symbolization of what like if you have a ball on top of the flag – different symbols have different concepts behind them – when you put – whatever’s on top of the flag stand in compliance with Army regulations,” Gould said.

“They’re going to hold him there for forty five days under the forty five days trust moratorium – the reason why they didn’t move him out of that vessel and take him into the court house is because he’s in a foreign vessel in dry dock  where he’s already cleared through the customs clearance mechanics – what that means is he’s checked himself into the motel – he’s got himself a number and he’s good to go so he’s on the Manifest – so they’re going to hold him there for 45 days – at the end of the 45 days they will move him off the vessel… and they’ll take him to the courthouse.

“Now what he was engaged in yesterday was a violation of Title 18 1343 Wire Fraud – he should have never participated on a TV screen with any judge – first of all the judge can be in Katmandu you don’t know exactly where they are there’s no continuance of the evidence which violates the Rule 12(b)(1) of Subject Matter Jurisdiction – judge doesn’t have Subject Matter jurisdiction because there’s no joinder between him and that person – him and Field – so Field should have turned off the television and turned his back to it– turned his back and told the Bailiff this Title 18 1342 Wire Fraud I’m not going to participate – because I have no federal joinder with the judge – but they have joinder with him at that foreign vessel in dry dock jailhouse a foreign vessel in dry dock for a customs clearinghouse – the mechanics of that are run through the Port Authority of the Department of Transportation for the State of Wisconsin.

Sheriff Hove is required by law to give McConnell those documents.

Facebook0Tweet0Pin0
About Timothy Holmseth 703 Articles
Timothy Charles Holmseth is an award winning news reporter and investigative journalist. He is an FBI witness in a national profile kidnapping case. He captured rogue CIA and FBI child traffickers on tape discussing their operations. He has been targeted for a decade. In 2019 Timothy Charles Holmseth became part of the Pentagon Pedophile Task Force. Timothy Holmseth is the only reporter authorized to report original content for the PPTF. There is ONE MAN between Timothy Holmseth and President Trump.