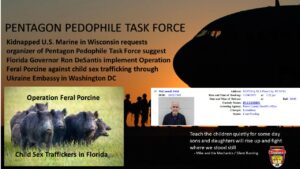 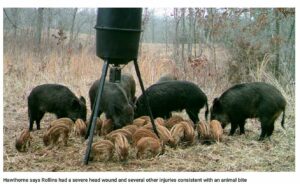 Here’s the back story.

McConnell, 70, is the former U.S. Marine who founded The Children’s Crusade and was recently arrested in Pierce County, Wisconsin on a fake warrant from Broward County, Florida. According to Christopher Hallett, CEO, E-Clause LLC. Florida, (E-Clause does loss prevention for the United States government) the warrant and charges against brought against McConnell in Broward County, Florida are saturated with fraud. 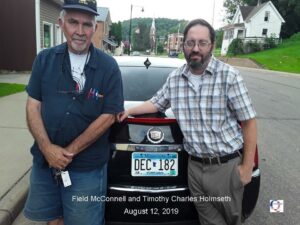 “What I’m going to suggest is that if the State of Florida and Tampa is trying to clean up sex trafficking perhaps they ought to have an Operation Feral Porcine – and I would encourage the governor [Ron] DeSantis to authorize Operation Feral Porcine – and if you want to use high school terms instead of college boy terms a feral porcine would be a wild pig – and there’s some wild pigs running lose in a certain county in Florida that are trafficking children through the Ukrainian Embassy in Washington DC and there’s four household names of career politicians who have sons that have made millions of dollars in the Ukraine and there’s four of them and I always forget one but some of the listeners would know the fourth – the first three are Joe Biden’s son, John Kerry’s son, and Mitt Romney’s son – so what are they doing in the Ukraine that’s making them money – is it all about Energy?” McConnell said.