You cannot turn on your television or surf the Web without reading continuously updated stories about Gabby Petito and Brian Laundrie.

There may be a reason.

Does O’Connell have information about the Brian Laundrie investigation that others don’t? The answer to that questions may be ‘yes’.

FOX NEWS introduced O’Connell as a former FBI agent; but didn’t tell you what O’Connell does these days.

O’Connell’s bio says she retired from the FBI in 2016 and became the CEO of her own company called MOA – Maureen O’Connell and Associates. “I was also named the National President of InfraGard National Members Alliance, the FBI’s critical infrastructure protection outreach group,” O’Connell’s bio said.

In March of 2008 a publication called The Progressive Magazine published an in-depth piece about InfraGard entitled ‘The FBI Deputizes Business’.

Phyllis Schneck, who was the chairman of the board of directors of the InfraGard National Members Alliance at the time of The Progressive Magazine story, said InfraGard members, sometimes hundreds at a time, have been used in “national emergency preparation drills.”

Curt Haugen, CEO, S’Curo Group, a company that, according to its website, does “strategic planning, business continuity planning and disaster recovery, physical and IT security, policy development, internal control, personnel selection, and travel safety,” was also interviewed for the The Progressive Magazine story.

“Haugen tells me he is a former FBI agent and that he has been an InfraGard member for many years,” The Progressive Magazine reported. Haugen said InfraGard “absolutely” does emergency preparedness exercises.

FOX NEWS and mainstream broadcast networks are saturating the American public with 24/7 coverage of information and images pertaining to a single so-called news story – the Gabby Petito and Brian Laundrie saga.

The evolving narrative and messaging of the ongoing Petito/Laundrie news stories surrounds what is being called “domestic violence”.

The words “domestic violence” have been strategically hijacked from Article 4-Section 4 of the U.S. Constitution that says “The United States shall guarantee to every state in this union a republican form of government, and shall protect each of them against invasion; and on application of the legislature, or of the executive (when the legislature cannot be convened) against domestic violence.”

Evidence shows, that using the Petito-Laundrie dating-couple abuse and murder saga, the media is promoting a new meaning of “domestic violence” to mean acts committed between the People, themselves (rather than invasion). This switching out of the meaning of “domestic violence” was/is required to overthrow the United States government from within through the judicial system.

Here’s how and why.

It is impossible for people to ‘invade’ other people in the sense of family problems. Nonetheless, under the guise of protecting the innocent and helpless, the media, FBI, CIA, and members of the BAR Association, diabolically created an entire ‘system’ called Family Law and erected Family Court’s and CPS agencies throughout the United States.

The Family Law system acts and functions entirely outside the U.S. Constitution. It is used by an international criminal cartel to accomplish nearly ANYTHING. It is its own system of government and court orders are issued by one man (judge) at his own discretion. It is used to kidnap children from their parents and traffic them with no criminal charges filed or Trial by Jury. It is used to seize guns and ammunition from innocent people who are not charged with a crime. It is used to take away a man’s Freedom of Speech with the quick swipe of a pen. It is used to launder billions and billions of dollars and enrich the participants.

If the Gabby Petito-Brian Laundrie murder-mystery was strategically orchestrated and carefully choreographed as a national emergency preparation drill from its conception by FBI, InfraGard, and mainstream news, all the participants have likely forfeited their First Amendment protections and are subject to 18 U.S. Code § 2384 – Seditious conspiracy

Here’s why the First Amendment cannot be a defense.

FOX NEWS was recently exposed after evidence showed the network advanced a massive hoax regarding a so-called FBI agent named Bob Hamer who made the news in 2005 after he reportedly infiltrated the North American Man Boy Love Association (NAMBLA).

Evidence strongly suggests Hamer was a real pedophile and child rapist and was given a cover-story by the FBI after he got caught.

In 2009, evidence was given to the Minneapolis and Jacksonville FBI by an award-winning news reporter from Minnesota named Timothy Charles Holmseth who prepared a detailed report for the FBI, and was also interviewed in person twice at the federal courthouse in Grand Forks, North Dakota.

Holmseth’s information revealed that in 2009 a convicted sex offender named John Regan was posing as a pastor and had interjected himself into the investigation of a missing child from Florida named HaLeigh Cummings. John Regan told several witnesses interviewed by Holmseth on recorded calls, that he was a “CIA agent” and “undercover pedophile for the FBI”.

Author and victims advocate for the missing child’s mother, Wayanne Kruger, an associate of Hillary Clinton, told Holmseth that John Regan was trafficking kidnapped babies and children and moving them out of the United States through the Ukrainian Embassy in Washington DC using church dossiers and fake medical records.

This creates a problem for the FBI and CIA.

Bob Hamer resurfaced in 2017 when he appeared on the Board of Advisors of Veterans For Child Rescue Inc (V4CR), Arizona, which was created by Hillary Clinton’s former personal security guard and D-grade Hollywood actor, Navy SEAL Craig (Sawman) Sawyer. Hamer’s V4CR bio states he has played the roles of criminals such as an international arms dealer, white collar criminal, and pedophile. Hamer said during an interview there is a passport in the “FBI museum” that was made by the “Chinese” for him (Hamer). 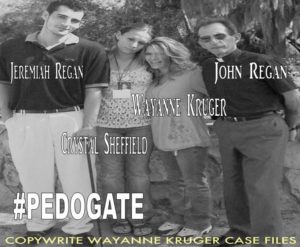 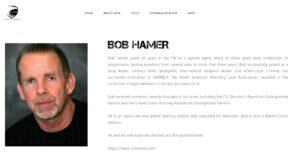 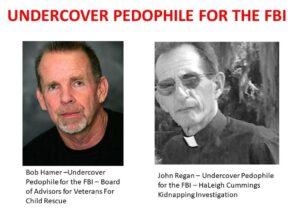 Hamer was featured on Oprah and heralded as a hero.

But evidence shows it was all fake news.

Evidence, which was released  by the FBI, shows John Regan (Bob Hamer) may be the mysterious man referred to as “Mr. Reagen” in the late 1980’s by child sex abuse victim Max Livingston during the child’s interviews with law enforcement during the investigation into what became known as THE FINDERS.

Evidence shows FOX NEWS, FBI, CIA, InfraGard, and others are attempting to overthrow the United States government from within to avoid prosecution for international human trafficking and crimes against humanity.