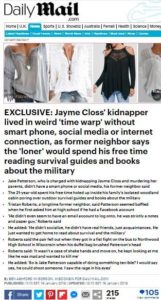 This propaganda piece was instantly recognized by timothycharlesholmseth.com as an attempt by co-conspirators worried about their telephonic and Web communications with Jake Patterson.

And my prediction was correct. 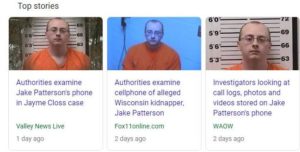 It wasn’t the first piece of controlled disinformation published by Daily Mail in the Closs case. On January 14, 2019 timothycharlesholmseth.com published ‘Undated photos of Patterson home create further mystery in Jayme Closs’ when Daily Mail published a slew of un-sourced photos taken from inside Patterson’s house.

The source of the photos taken in the Patterson home should be questioned by law enforcement to see if Jayme was present when the photos were taken.