Are the people of Minnesota being secretly terrorized by police and other government officials during the COVID-19 outbreak?

On March 25, 2020 KSTP EYEWITNESS NEWS published ‘As state pleaded for people to stay home, courts kept ordering evictions in Minnesota’. The story featured the plight of Jenni Bruce who was evicted from her residence as the COVID-19 pandemic was unraveling in Minnesota.

The Bruce eviction was not an isolated incident.

NOTE: The PPTF is comprised of various professionals that were grafted into an existing group of intelligence officers investigating and gathering evidence of international human trafficking. The task force, which was originally formed with a nod from The White House, presents evidence on international crimes to the Department of Defense and the U.S. Military. Some of the evidence gathered by the PPTF involves organized judicial kidnappings and child trafficking by Child Protection Services (CPS). Jeremy Boles had been working with Timothy Charles Holmseth (official news reporter for the PPTF) for many years regarding the seizure of his (Boles’) children by the government.

The ORDER demanding Boles vacate the residence was signed by Dmitri Ikonitski, Chief of Police, Health Officer, City of Henderson.

The ORDER demanded Boles be out by 5 P.M. the same day.

“The condition of such premises constitutes a clear and imminent danger to the life or health of occupants or other persons and requires vacating the premises,” the ORDER said. 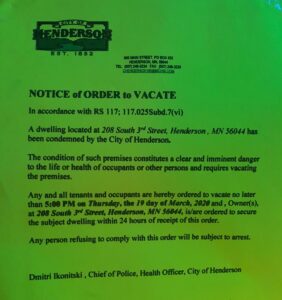 According to Boles, the reason for the ORDER was merely based upon the fact that the City of Henderson shut the water off. Investigation by the PPTF reveals there is some confusion regarding who is responsible for the bill because the homeowner exited after foreclosure, while Boles remained.

The water bill had gone unpaid for some time and was overdue.

Boles initially began living at the residence with the homeowner Anthony Cermak in the summer of 2019. On November 26, 2019 a Sheriff’s Certificate of Sale was filed in COUNTY OF SIBLEY, and the house was purchased by Fannie May. Fannie May is a Mortgage loan company – a United States government-sponsored enterprise.

The Sheriff’s sale documents served on the residents stated the date and time the residence needed to vacate was May 26, 2020.

Boles said Henderson police had been harassing him for quite some time and shining lights in the windows of his house. Boles said he told Chief Ikonitski he was going to file a complaint, which sparked a physical attack by Ikonitski who slammed Boles up against the car. Boles said Ikonitski told him to ‘keep his fucking mouth shut’.

‘I started screaming really loud because I wanted someone to see what was happening because I thought he was going to kill me,’ Boles said.

Police records show Boles was arrested by Chief Ikonitski on March 11 for Obstruction of the Legal Process. Boles said Ikonitski wrote the wrong date on the Citation. Boles said the incident actually happened on March 17.

“The Sheriff’s Certificate was sold to the federal government on December 13, 2019 knowing the tenants were still there,” the task force member said.

The task force member spoke with the Evictions Department at Usset, Weingarden & Liebo, P.L.L.P. who manages the property and Foreclosure until the expiration of the redemption period. “They told me all evictions and foreclosures had been suspended by Trump’s orders,” the task force member said.

Armed with the knowledge that all evictions had been ceased, the task force member contacted Chief  Ikonitski on behalf of Boles to advise  Ikonitski that in response to the COVID-19 crisis, President Trump had issued an Order that stops all evictions.

“He just hung up on me like I was a nobody,” the task force member said. 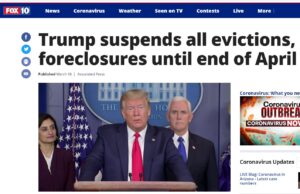 “I advised the woman I spoke with at the Henderson city office that the city clerk could give the delinquent bill to the county auditor to be added for collections on the real estate taxes for the following payable year which would guarantee payment in full. She insisted that nothing could be worked out despite the fact she knew the City was going to be paid in full anyway,” the task force members said.

On March 21, Boles met with a representative of the PPTF. When Boles returned home from the meeting, he found somebody had broken into his house. “They used my sledgehammer to break into my room. It was downstairs and now it’s up-stairs,” Bole said.

On March 22 Boles did not make contact with the PPFT as arranged. The task force began searching for Boles and discovered he had been arrested for a litany of charges including felony burglary.

“How is he superposed to get a place to stay with no ID,” the task force member said.

On March 23, 2020 Minnesota Governor Tim Walz suspended evictions in Minnesota due to COVID-19.

“It is very strange how obsessed the chief of police and city officials in Henderson seemed to be about vacating that residence before March 23,” the task force member said.