The following letter was submitted to the FBI in Jacksonville, Florida today.

In Re: HaLeigh Cummings / Pornographic Image

In 2010 your agency requested the Minneapolis FBI interview me regarding matters surrounding the kidnapping of a little girl in Florida named HaLeigh Cummings. As your records will reflect, I was interviewed by Minneapolis FBI Special Agent A.J. Eilerman.

On October 7, 2022, I contacted the FBI in Ohio regarding a photograph of a vagina that was texted (unsolicited) to a former Minnesota judge named Randi Lynn Erickson from an admitted kidnapper and sexual torturer from Martins Ferry, Ohio named Alexandria Goddard. OHIO FBI LETTER ATTACHED

Enclosed on a USB flash drive you will find an audio recording of an interview I conducted of REDACTED REDACTED  Donald Knop. Knop told me that REDACTED possessed close-up photos of HaLeigh Cummings’ vagina. 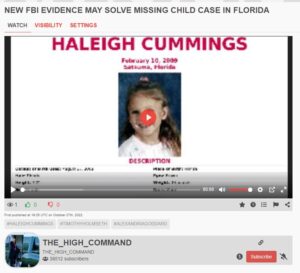 Alexandria Goddard boasted to Randi Lynn Erickson that she has done legal paperwork for REDACTED, REDACTED, and REDACTED.

I am requesting you investigate the photograph of the small vagina with no pubic hair and strange bruising texted unsolicited by Alexandria Goddard to Randi Erickson to determine if the vagina photo is the same photo of HaLeigh Cummings that Donald Knop described to me.