Why did Randi Lynn Erickson, Minnesota, the former tribunal judge who escrowed crime against humanity evidence detailing cannibalism by Hillary Clinton and world leaders, which is filed under seal in the U.S. Court – Minnesota, call Ohio law enforcement to report that she believes she has been the victim of a plot to murder her and plant pornography on her telephone?

She may have been sent a photo of a raped corpse. 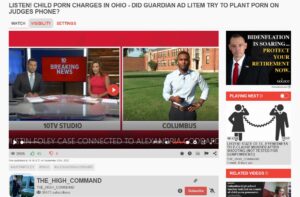 Alexandria Goddard, Ohio, is a psychotic kidnapper, rapist, and sexual torturer from Ohio – AND she’s got a message for the Prosecutor in the Northern Division Courts in Belmont County, Ohio.

Goddard recently announced she wants a vagina line-up conducted to compare her vagina to the photo of the small hairless vagina that she texted to a judge in Minnesota. View Goodard’s demand in the video below. 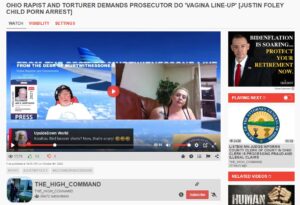 Evidence shows there may be a connection between the Goddard vagina photo, and the Justin Foley child pornography arrest in Ohio.

On August 16, 2022, the National Center for Missing and Exploited Children received an anonymous tip that Justin Foley, Columbus, Ohio, was in possession of child pornography.

“Court documents state that on Aug. 16, Delaware Police received a tip from the National Center for Missing and Exploited Children and filed by Google. The tip was tied to an online Google account that was allegedly owned by Foley.

Foley allegedly uploaded several images of apparent child pornography to the Google account from an external hard drive. Court documents state that during a Sept. 20 interview with police serving a search warrant, Foley allegedly admitted to possessing the images and that he was aware the child in the images was under 15 years old.

Foley is currently facing one charge of second-degree felony illegal use of a minor or impaired person in nudity.”

Facts and information, assessed and analyzed in good faith, show a fact-pattern that suggests the anonymous report made to NCMEC on August 16, 2022, may be connected to an admitted sexual predator, torturer, and rapist from Ohio named Alexandria Goddard. (Watch video below to learn about the sex and torture of a kidnapped man by Goddard and Ohio cops). 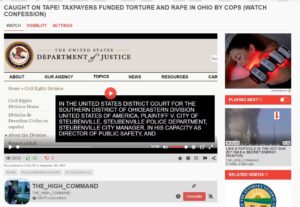 Very compelling evidence shows that in the days leading up to the arrest of Justin Foley, Goddard and fellow conspirators, including police, attorneys, and a possibly a judge, developed a plan to murder, and/or plant pornography on the telephone of a former Tribunal judge from Minnesota named Randi Lynn Erickson.

The plan also involved an attempt to lure Randi Lynn Erickson to her death.

After news stories began to be published that linked Goddard to a photo of a vagina that she texted to Erickson, Goddard appeared on a You Tube program with William K. Murtaugh, Apopka, Florida who claims to have press credentials.

Goddard appeared on From The Desk Of Murtwitnessonelive and said she is demanding the Belmont County Prosector’s Office conduct a ‘vagina line-up’ to compare her vagina to the image of the vagina she texted to Randi Lynn Erickson.

Goddard appears to be referring to Scott Lloyd, the prosecuting attorney for the Northern Division Court in Belmont County, Ohio.

The following is a Timeline of Facts. 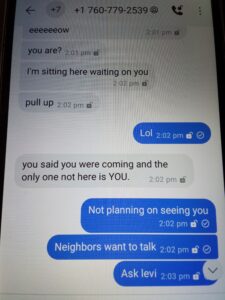 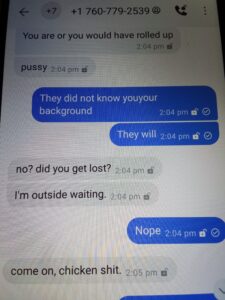 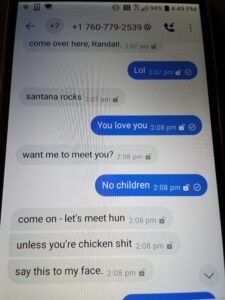 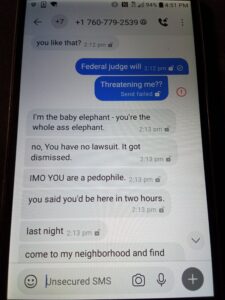 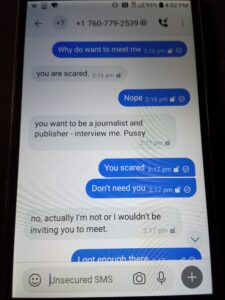 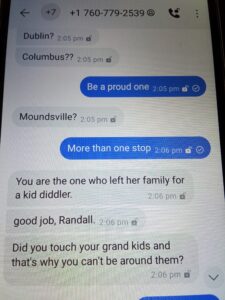 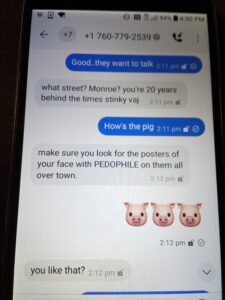 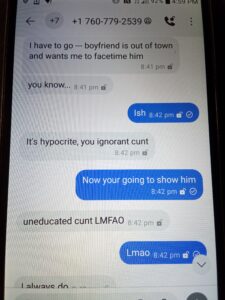 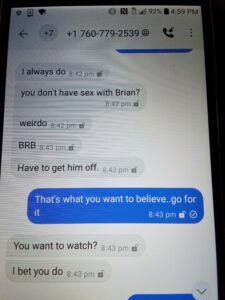 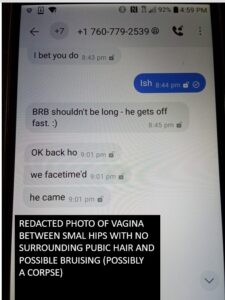 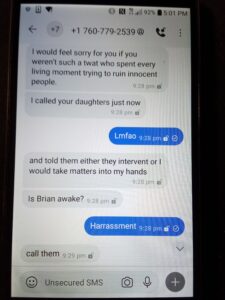 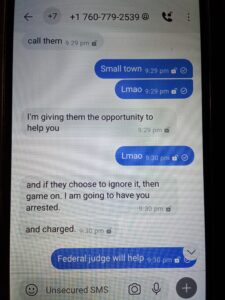 In Re: Summer Wells

On August 4, 2021 the TBI published on Twitter,  “#TNAMBERAlert: The investigation into the disappearance of Summer Wells remains ongoing. Misinformation shared on social media about the case continues to cause problems. We are again urging the public only to share info from official sources.”

I have information that will lead you to specific individuals that are working as part of an organized operation that is in place to threaten and tamper with witnesses, obstruct justice, and strategically disseminate disinformation at a mass scale in many missing child cases including the case of Summer Wells.

I am an investigative journalist, author, and have been an award-winning news reporter with the North Dakota Newspaper Association. I passed a security clearance background check performed by the U.S. Department of Agriculture and was authorized to enter the secure areas of a locked federal facility.

I am presently an independent journalist and report for the Pentagon Pedophile Task Force (PPTF), which was created via Presidential Executive Order within the Donald Trump White House per a liaison to the President, as part of the United State Army Intelligence Support Activity (USAISA) and Joint Special Operations Command (JSOC) which gathers actionable intelligence regarding international crimes and turns it over to the U.S. Military via liaison for review and possible action.

In December, 2017 I sent a MEMO to A.G. Jeff Sessions warning President Trump about the perils of Mike Pence and an international human harvesting operation. The MEMO was Tweeted by high profile attorney Lin Wood who encouraged the world to read it. https://timothycharlesholmseth.com/attorney-lin-wood-encouraged-the-world-to-read-timothy-charles-holmseths-memo-warning-trump-about-pence/

In 2010, I was deemed a credible witness after I was interviewed by the Minneapolis FBI at the federal courthouse in Grand Forks, North Dakota. I was interviewed regarding recorded interviews I conducted with multiple key figures in the national profile kidnapping and AMBER ALERT case of five year-old HaLeigh Cummings, Florida. I learned HaLeigh was a sex abuse victim who had been photographed in ways that featured the damage to the child’s private parts caused by the abuse. I learned the secret photographs (kiddy porn) were being secretly (unofficially) passed around by a team that involved HaLeigh’s family, a CPS child protection worker, attorney(s), PI’s, advocates, paralegals, events planners, etc. I learned Haleigh’s family partnered with a licensed PI named William E. Staubs ‘Cobra the Bounty Hunter’ (Case Closed Inc, Florida) and, a convicted sex offender from Hastings, Florida named “John Regan” who dressed up as a pastor and involved himself in the search for HaLeigh. I interviewed scores of people who told me John Regan identified himself as a “pastor” (who possessed a Chaplain’s Badge), an “undercover FBI agent”, and a “CIA agent”. John Regan and his son, Jeremiah Regan, met with Staubs and HaLeigh’s family to conduct a ‘private search’ in a rural location for HaLeigh that turned up ominous [planted] items that seemingly connected to HaLeigh and created the [false] impression HaLeigh was dead. FBI Special Agent A.J. Eilerman, and, Major Gary Bowling, Director of Law Enforcement, Putnam County Sheriff’s Office, Florida, both agreed that the group involving Staubs and the Regan’s had planted the evidence to make HaLeigh appear dead so people would stop looking for her.

Wayanne Kruger, an associate of Hillary Clinton, and the official advocate for HaLeigh’s mother, told me during recorded interviews that John Regan told her he was “CIA” and “FBI’. She said John Regan told her the “FBI” already had HaLeigh but wanted to keep it quiet. She told me John Regan told her he reported to “Washington”. She told me John Regan was involved in an international human trafficking and baby sales operation that utilized CPS and other methods to obtain babies and children and move them out of the country through then Ukraine Embassy in Washington DC using faked church dossiers and faked medical records.

In 2020, the PPTF determined John Regan was one in the same as “REDACTED” who serves on the Board of Advisors for (REDACTED). (REDACTED), Arizona. REDACTED was founded by Hillary Clinton’s former REDACTED, former REDACTED. REDACTED publicly states he formed REDACTED in April of 2017 with high ranking FBI, CIA, and other federal agencies and military groups.

REDACTED in 2009 as Pastor John Regan in the HaLeigh Cummings case.

THE FINDERS
https://vault.fbi.gov/the-finders/
In the late 1980’s an investigation took place regarding an organization that later became known as THE CIA FINDERS CULT after six neglected and abused children were discovered with strange men in a Tallahassee, Florida park. According to FBI files that have been released, the FINDERS had a secret headquarters in a building in Washington DC which contained evidence of kidnapping tactics, child porn, ritual abuse, ritual sacrifice, and espionage involving China. Wayanne Kruger told me that John and Jeremiah Regan ‘reminded’ her of the FINDERS. Investigation records released by the FBI show child sex abuse victim, Max Livingston, 6, told detectives he believed everything belonged to “Mr. Reagen”. REDACTED told REDACTED in a published interview that REDACTED once possessed a “passport” that was made by the “Chinese” for him and that the passport is now in the “FBI museum”.

THE FINDERS was/is a CIA operation that entails full spectrum tactics for international trafficking and racketeering that permeates every form of government and the private sector including social media and the mainstream corporate media.

Operatives within this criminal organization include:

Levi Page, Tennessee, and, Alexandria Godard (not an American citizen), Ohio. You can view Pages You Tube at  Levi Page – YouTube https://www.youtube.com/c/LeviPageTV/videos

If you investigate these operatives it is very likely you will be led to missing children and you will determine who is responsible for their disappearances.

You should be advised CID at Fort Campbell has already requested, and received, the evidence of rape and murder threats made against me, my child, and my publisher Randi L. Erickson, REDACTED, that involved Fort Campbell being a burial ground for murder victims.

I visited Rogersville, Tennessee as part of PPTF operations and I was filmed in front of the Rogersville city sign. You can view that and other information in a video that was published at the following link TIP FOR TENNESSEE BUREAU OF INVESTIGATION ON SUMMER WELLS [REDACTED KID FINDERS] REDACTED 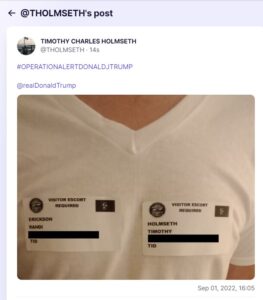 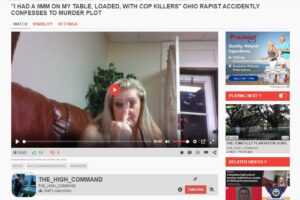 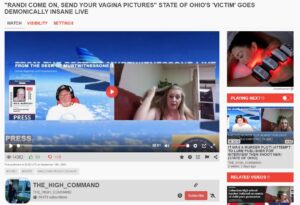 49. Randi Erickson discovered the Judicial Branch in Ohio is impersonating the Executive Branch on official documents, and then, the Clerk is processing fraudulent criminal charges using STATE OF OHIO without authorization, and then filing false claims. Randi Erickson telephoned the Ohio BAR and Clerk of Court, which you can hear in the videos below. 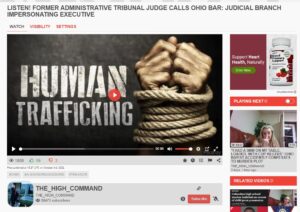 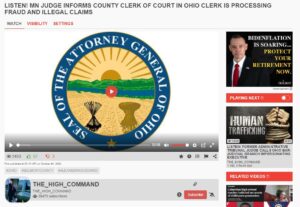