In 2009, I began conducting interviews regarding a national profile kidnapping of a five year-old from Florida named HaLeigh Cummings.

I stumbled upon an international crime syndicate of CIA-FBI child sex traffickers connected to Clinton Global. I acquired names, methods, and routes from operatives connected to the Pentagon and former U.S. Presidents. I obtained the most graphic of details of torture and rape (e.g. child raped by paying customers for so long the child died – split open – thrown in the garbage).

Orders were issued to operatives embedded into the Florida judicial system to obtain a “cyber-stalking” court order against me in Broward County to bring my reporting to a halt. The city government and police department in East Grand Forks, Minnesota were ordered to destroy my computer and use the Florida court order to arrest me if published information about the cartel.

Sources in the intelligence community advised me that my information was being intensely suppressed because the high profile nature of the sources and cases would dramatically affect public opinion on the Trump Wall and the 2020 election.

After learning there was a hit put out on me – Q – PROJECT AMBITION was developed and initiated.

I (Timothy Charles Holmseth) was arrested by the city police in East Grand Forks, Minnesota on February 19, 2018 and again on November 1, 2018 for allegedly publishing information on the Web that violated a court order from Broward County, Florida.

Emerging evidence shows the City of East Grand Forks Police and City Attorney are actually attempting to STOP one of the most effective news reporters to ever address and report on police shootings, mysterious unsolved deaths, child trafficking, and drug running in the region.

According to President Trump the biggest danger to our republic is the lying mainstream media that he calls “fake news” – an agenda driven propaganda arm of the Deep State.

The plan against me and my publication involved an admitted plot described by co-conspirator Tina Church, Specialized Investigative Consultants Inc., Indiana, who told me during recorded calls that she had spoken with Galstad, and warned Galstad, to either commit me to a mental institution or her Chicago based attorney would sue the City of East Grand Forks.

During a court hearing on July 30, 2018 in Polk County, Minnesota, Attorney Ronald Galstad told the court he didn’t believe I was mentally competent to aid in my own defense and requested I be ordered to submit to a psychological evaluation.

Galstad told the court I had been pulled over by a police officer on the way to a previous court hearing, and noted I called 911, which Galstad said proved I had become unduly afraid that I was going to be harmed (thus I had a mental problem).

Galstad told the court that I claimed the police were shooting people (he stated it to the court as if I was crazy for saying it).

Galstad has now initiated the plan to declare me mentally incompetent.

Then, David Murphy, the EGF City Administrator entered the scheme.

On August 19, 2018 the Grand Forks Herald, Bismarck Tribune, and many other Forum Communication news outlets published QAnon: New version of old phenomenon. I was featured in the story and described as “sick” by Murphy, who suggested it was appalling I would allege ‘government employees’ were involved in a sex trafficking cover up.

Murphy has now described me as mentally “sick”.

In September I submitted to the psychological evaluation Galstad requested. Galstad and the local police provided the evaluator with CD’s containing interviews I had given to University of Minnesota Professor Sarah Westall wherein we discussed the Jacob Wetterling case.

In an Opposition Brief filed on December 27, 2018 Attorney Galstad alleges I am QANON.

In the same legal Brief, Galstad cited case law that he suggests disqualifies me from being an ‘investigative reporter’. The Brief stated in part that a reporter must be “cautious when dealing with special interest groups, should remain objective throughout the investigation, obtain opinions from “informed sources” (including a judge, prosecutors, and law enforcement officials) on both sides of the issues in order to avoid losing objectivity or becoming emotionally involved in the story…” 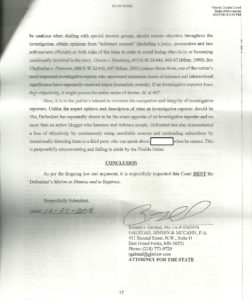 My written professional references come from the (former) President of the Minnesota County Attorney’s Association, city leaders, and elected officials. I was deemed a “credible witness” by the FBI in a kidnapping investigation. I won two first place awards from the North Dakota Newspaper Association for news reporting and column writing.

The video below shows why Deep State operatives in the area want my publication stopped.