Evidence has been uncovered that shows agents of a foreign power are stealing the land records in Minnesota (and across the United States), in what appears to be an operation that began in the 1990’s – and has been executed with military precision.

“They are stealing all of our records,” said Randi Lynn Erickson, a licensed abstractor, Notary, and former Truth and Taxation judge for the State of Minnesota.

Minnesota state statute requires Erickson, who has an oath to Public Trust, report any concerns of illegal activity, first internally, and then, to the legislature.

But time may be running out.

The oath that binds Erickson to the U.S. Constitution has been systemically removed as many officials are no longer bound by oath and are not required to swear an allegiance to the United States.

The revelations brought to light by Erickson appear to be a national emergency that has been kept well hidden from the American public.

After learning details from Erickson, the investigation branched out.

There are several County Recorders in Minnesota who were willing to talk on the condition of anonymity.

THE ENEMY PLANS TO SHUT DOWN COMMERCE

“If they steal all the land records – commerce across the whole country will completely shut down,” one County Recorder in Minnesota said.

“How do you prove you own something? If the records are stolen it will be like the wild west. Possession will be everything,” another Recorder said.

THE ENEMY REMOVED THE ‘OATH OF OFFICE’

Erickson said her oath requires she defend the U.S. Constitution against all enemies “foreign and domestic”.

However – the enemy has had about 25 years to take over from within.

“Our land and real estate records have always been safe because the County Recorder is an elected position – and the County Recorder takes an oath to the U.S. Constitution. But the enemy within has quietly removed those protections in many places,” Erickson said.

“They’re using people like school board members to fill the positions,” Erickson said.

“The ‘elected’ position went to an ‘appointed’ position – and then the appointed people did whatever they wanted,” said one Minnesota official.

THE MINNESOTA GOVERNMENT SOLD THE OFFICE TO THE ENEMY

“They sold the office off,” Erickson said, explaining how the security of the entire country is in jeopardy because everything is held together by real estate and commerce.

“They sold the rights to the records off and retained the right to only sell copies. So, nobody needs an oath anymore,” Erickson said.

An investigation into Erickson’s claims revealed startling facts regarding the illegal transfer of the land records and how it is being done.

All the records are supposed to be kept in the custody of the County Recorder. However, the ‘elected’ position of Recorder has been converted into an appointed position (with no oath), and the appointed recorders have sold off the records to foreigners.

“If the BAR attorneys and law firms don’t teach real estate and real estate law, who is going to protect the country? It is the licensed abstractors that are the watch dogs for the State when it comes to real estate records and the conduct of the County Recorders,” Erickson said.

During a recent speech by President Trump in Wisconsin, Trump talked about Tim Michaels who Trump is endorsing for Governor.

Trump talked about Michaels’ company, and the huge tunnels Michael’s can dig underground and into mountains. 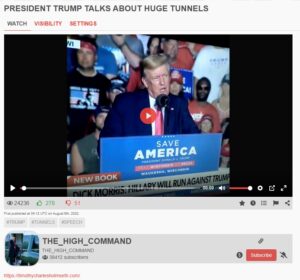 Trump clearly supports Michaels – but Trump, a real estate guy, may have been telegraphing a much more important message to the American people.

There are tunnels being dug below the surface of the earth and the landowners above don’t even know about it.

When you get a deed to property you own everything – the land, the air and the water. In Minnesota the land rights go all the way to center of the earth. Above the ground and below the ground, one Minnesota official said.

“There’s not supposed to be anything hidden in a real estate transaction,” Erickson said.

But all is not as it seems.

“Developers are retaining the mineral rights below a property. They actually have the right to tear a house down if there are minerals below the surface. And they can even sell those rights to a foreign corporation,” Erickson said.

“There are things happening beneath our feet and we don’t have a clue about it,” Erickson said.

“What if a corporation that is not loyal to the U.S. Constitution owns land beneath us? Then we have to ask ourselves, ‘how did a foreign power get the authority to create tunnels under the surface of the United States,’” Erickson said.

THE RECORDS ARE NOT SECURE

Some of the corporations that are now controlling the records are:

Evidence shows the takeover of the records began over two decades ago, when our government became infiltrated by filthy animals.

One insider recalled seeing the government in Minnesota taking a turn for the worst as far back as the 1990’s. The insider provided names of witnesses that could be contacted for further investigation. The results were astounding.

When the FBI began plotting against Trump in the now fully exposed Russia, Russia, Russia hoax – the American people soon learned about the degenerate behavior of FBI officials Peter Strzok and Lisa Page.

However – in reality – the tales of primitive cave animal behavior and sex anywhere were nothing new.

It appears to go hand in hand with Treason.

According to a source in government.

The head of the Property Tax Division (man – first in command) in a Minnesota county was caught having sex on a table in a conference room with a woman (the second in command). They were caught by a man who was third in command. None of these three people were elected by the People. The two sex freaks had no oath of office. And according to the source, the two people having sex on the table had absolutely no qualifications to be involved in real estate law and held no licenses. The sex on the table people came from the school district. One was moved out of his position and the other two were promoted.

According to another insider, there was a BAR member in Minnesota who was caught with child pornography on his government computer. The man had no oath of office. The man was fired but not charged with a crime. The man is presently a BAR attorney.

This is a developing journalistic investigation.