Timothy Charles Holmseth posted a public statement on GAB social today regarding his scheduled appearance for today on Reba LIVE.

I am advised that in October of 2020 you met and/or interviewed certain people. There is a connection to General Michael Flynn. There is a great deal of information at http://www.timothycharlesholmseth.com

Somebody has been threatening to kidnap, torture, rape, and murder me (as well as my minor children, family, and colleagues, and my colleagues’ kids/grandkids). The evidence is in the custody of CID at Fort Campbell, Kentucky, U.S. Department of Homeland Security, and other state and federal law enforcement.

I regret to inform you that I cannot appear on your program at this time.

The people under investigation are now threatening to kidnap me for coming onto your program. 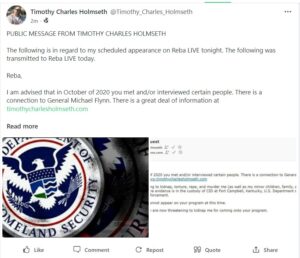