The U.S. Department of Defense was recently contacted by the mainstream news outlet Reuters about reports of abused and tortured children being rescued by U.S. Military from underground tunnels.

Reuters’ report on the reporting of other reporters (lol), which cites a sum total of ZERO sources by name, reveals their alleged spokesperson from the Department of Defense would not deny the rescue operations were taking place.

Timothy Charles Holmseth is exclusively reporting that licensed legal professional(s) have been arrested by U.S. Military for human trafficking via Child Protective Services (CPS) and are presently in GITMO. One bad actor owned 17 Family Services – Child Protective Services that were legally formed through the State (but unlawful because human trafficking and child sex abuse is unlawful) (legal is shit made up (SMU) by BAR attorneys – rules they made for themselves).

Not achieving the denial of the child rescue operations they desperately sought from the Department of Defense… Reuters then proceeded to try to split hairs regarding the composition and origin of an entity called the Pentagon Pedophile Task Force.

On June 15, 2020 the publication Reuters published a self-professed ‘Fact Check’ of stories published by the Pentagon Pedophile Task Force regarding ongoing rescue operations of children, which Timothy Charles Holmseth has regularly reported.

Timothy Holmseth reported his high-level source said most of the children rescued by U.S. Marines underground in California were believed to haven been kidnapped and human trafficked through Child Protective Services (CPS).

The Pentagon Pedophile Task Force is under Joint Special Operations Command and provides actionable intelligence to the U.S. Military. 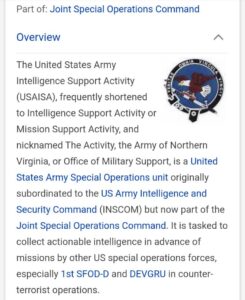 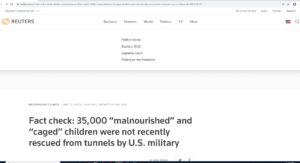 Fact check: 35,000 “malnourished” and “caged” children were not recently rescued from tunnels by U.S. military

Viral claims on social media purport that a recent U.S. military operation rescued 35,000 “malnourished, caged and tortured” children from tunnels beneath New York City’s Central Park and other unnamed U.S. cities. There is no evidence to prove key aspects of this conspiracy claim.

One viral example of the claim with over 14,000 shares can be seen here .

The central claims of the posts on social media point to an April 2020 publication on the website timothycharlesholmseth.com entitled, “Child Rescue Operation unfolding right now in NYC?” ( here ).

The website entry includes an audio clip of unidentified people claiming they know medical workers who treated the children. A video clip allegedly provides evidence of the existence of a child-trafficking ring and a plan for a rescue mission.

NO EVIDENCE OR REPORTING

Reuters was unable to find any reliable reports pertaining to the post’s central claim that 35,000 children had been found and rescued from “secret tunnels” in the U.S.’s largest city. Users on social media appear to take this as a sign of the media’s complicity in obscuring the relevance of this story, an argument often used in conspiracy theories. One example comment on the lack of reporting states: “They want this to be hidden.”

All online search queries related to the claim on social media point to results on YouTube, Pinterest, and the website Before It’s News, ( here ), which also fails to provide evidence to back its claims about the rescue mission of 35,000 children by U.S. military forces.

RESPONSE BY PPTF AND TIMOTHY HOLMSETH: Reuters cites an unnamed spokesperson for New York City’s Child and Family Services. Reuters also cites and quotes a spokesperson for New York City’s Administration of Child Services. Therefore – Reuters is doing the exact same thing they accuse the Pentagon Pedophile Task Force/Timothy Charles Holmseth of doing when they don’t provide the actual ‘name’ of their source when they report. The words “not aware” is not a denial.

A spokesperson for the New York Police Department told Reuters via phone also said that they were “not aware” of the alleged rescue reported in the claim.

RESPONSE BY PPTF AND TIMOTHY HOLMSETH: The words “not aware” is not a denial. Reuters again, is not naming the New York City Police Department spokesperson they claim they talked with on the telephone.

Holmseth, the namesake and operator of the website tied centrally to the claims ( here ), is a Minnesotan investigative journalist and alleged FBI witness who for years has spread unfounded theories related to missing children and human-trafficking rings ( here ). In 2018, Holmseth was doxxed by the hacker group known as Anonymous ( here ). Holmseth confirmed to VICE News that he was a believer in QAnon, a fringe group that claims Democrats are behind international crime rings.

RESPONSE BY PPTF AND TIMOTHY HOLMSETH: EVIDENCE/DOCUMENTS/RECORDINGS prove Timothy Holmseth was interviewed by the Minneapolis FBI on several occasions (at the request of the Jacksonville, Florida FBI) regarding the national profile kidnapping case of HaLeigh Cummings in Florida. Timothy Holmseth provided Special Agent A.J. Eilerman, Minneapolis, FBI with names and information about a convicted sex offender named John Regan from Hastings, Florida. Hillary-Clinton-associate Wayanne Kruger told Timothy Holmseth that John Regan and members of the judicial community and social services system in Florida were stealing babies and small children and trafficking them abroad via the Ukrainian Embassy in Washington DC using fake medical records and church dossiers.

RESPONSE BY PPTF AND TIMOTHY HOLMSETH: The Pentagon Pedophile Task Force has never claimed to be an “agency within the U.S. Department of Defense” as Reuters deceptively ‘reports’. Additionally – the PPTF has never purported to be a “Division” of the Department of Defense. The Pentagon Pedophile Task Force functions under Joint Special Operations Command.

Sgt. Robert Horton publicly stated in a live interview that he contacted the “Pentagon” and spoke with a JAG (Judge Advocate General) who confirmed the “Pentagon Pedophile Task Force” is real.

False. There is no evidence to back the claim that 35,000 “malnourished” and “caged” children were recently rescued from tunnels in New York and other U.S. cities by military personnel.

This article was produced by the Reuters Fact Check team. Read more about our work to fact-check social media posts here  .

RESPONSE BY PPTF AND TIMOTHY HOLMSETH: It’s actually kind of cute the way the Reuters ‘fact checker’ began to view themselves as the ‘law’ as they proceeded with their big special important job of fact checking. Reuters presented their readers with a “Verdict”. lol

What is VERDICT? (Black Laws Dictionary)

Iu practice. The formal and unanimous decision or finding of a jury, im- paneled and sworn for the trial of a cause, upon the matters or questions duly submitted to thein upon the trial. The word “verdict” has a well-defined signification in law. It means the decision of a jury, and it never means the decision of a court or a referee or a commissioner, in common language, the word “verdict” is sometimes used in a more extended sense, but in law it is always used to mean the decision of a jury; and we must suppose that the legislature intended to use the word as it is used in law. Kerner v. Petigo, 25 Kan. 656.