Prepare to have your mind blown.

I am going to tell you something nobody else has told you about Hillary Clinton.

If you’ve read my previous articles and listened to my recordings of Lawrence Dean O’Bryan, you may wonder if O’Bryan is mentally ill.

But keep your mind open.

On February 22, 2018 O’Bryan telephoned me and said he was a mind control victim under the CIA MK Ultra program and Satanic Ritual Abuse.

O’Bryan said he did special ops for the military which involved personally meeting several presidents in the Oval Office – conducting assassinations at the direction of George Bush Sr. – and even said he was the main shooter at Waco.

O’Bryan said part of his MK Ultra training included being duct taped to a chair and forced to watch a U.S. Congressman eat a live baby while opera music played.

So – it might seem to make sense that O’Bryan was arrested in 2010 and held for six years by the State of Florida where he had been deemed a paranoid delusional schizophrenic.

In December of 2010 deputies were dispatched to O’Bryan’s home in Hastings, Florida where O’Bryan was allegedly scaring his girlfriend. At some point gunfire erupted – he was shot, arrested, and eventually deemed incompetent to stand trial.

“Because I said I did special op missions for the government and I was fighting to get my retirement benefits – I didn’t tell them about the MK Ultra or any of that shit – they said oh you’re a paranoid schizophrenic delusional so they declared me incompetent to proceed,” O’Bryan said.

“I fired three warning shots and naturally they charged me with shooting at them first,” O’Bryan said.

DID HE SAY HASTINGS, FLORIDA?

O’Bryan’s arrest in Hastings, Florida caught my attention immediately. Hastings is a very, very small town that had a population of 580 in 2010.

O’Bryan told me that on June 21, 2008 George Bush Jr. “sent a shitload of special operations personnel to Hasting’s Florida to kill Barack Obama – we had a hell of a battle,” he said.

But my immediate thought was ‘Did he just say Hastings?’

Let’s back up almost a decade.

In 2009, I became an FBI witness in a child kidnapping case in Florida after I journalistically interviewed key figures in the HaLeigh Cummings and Casey Anthony cases.

During my many recorded interviews I was told about a ‘pastor’ from Hastings, Florida named John Regan who told multiple witnesses and ground searchers he was an undercover pedophile for the FBI and CIA.

The information I learned during my recorded interviews was so profoundly disturbing I reported it to the FBI. In a 22 page report I detailed everything I knew about John Regan and a group from Broward County that traveled to Northern Florida to insert themselves into the HaLeigh Cummings case.

Polk County Attorney (Minnesota) Greg Widseth was secretly given a copy of my FBI report by Lt. Rodney Hajicek, East Grand Forks Police. Widseth helped local Minnesota police and CNN/Nancy Grace (Art Harris) keep it hidden while they tried to develop a way to ‘stop’ me, which was evidenced in secret private emails that emerged.

I was personally interviewed by the Minneapolis FBI at the federal courthouse in Grand Forks, North Dakota in February of 2010.

In the 22 page FBI report I talk about William E. Staubs (a.k.a. Cobra). Staubs is a bail bondman from Broward County, Florida who told me John Regan was “undercover for real” and had come to Hastings to “hide out for a while”. 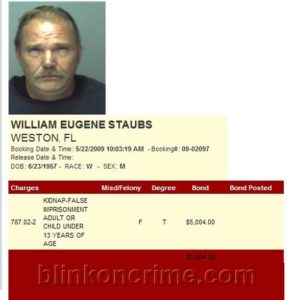 That’s why I recognized Hastings!

In 2011, Staubs told me he (Staubs) personally met with “Pam Bondi” on matters regarding a police shooting in Florida (O’Bryan …?). He told me he works with FBI, CIA, DEA, and ATF.

During the HaLeigh Cummings case Staubs was working with an ‘advocate’ from Arizona named Wayanne Kruger.

Wayanne Kruger, the protégé of Gloria Allred, told me John Regan worked for the CIA and reported to Washington. Kruger told me John Regan was involved in a baby sales operation out of Fort Lauderdale, Florida where he pretended he was a pastor to move infants through the U.S. Embassy with fake papers.

Kruger described a child trafficking apparatus in Florida where police, attorneys, DCF, and politicians were trafficking “hundreds” of children.

Wayanne Kruger became internationally known after Attorney Gloria Allred took the case of Kruger’s daughter, Desiray Bartak. They appeared on Oprah, 20/20 and many other shows.

On December 3, 1994 the Washington Post published ‘The Girl Who Told Her Secret’ which featured Kruger and Bartak.

“Yesterday Desiray was honored by Hillary Rodham Clinton and an organization called the Caring Institute for being one of the 10 “most caring” young adults in the country,” the Washington Post reported.

So…way back in the day Lawrence Dean O’Bryan is taped to a chair and forced to watch a U.S. Congressman eat a screaming baby while opera music played – and then, when he was no longer useful for special operations they simply use scumbag Florida deputies (CIA operatives) to try to murder him in Hastings, Florida.

It may now make sense why the police in East Grand Forks, Minnesota have invested untold thousands and thousands of dollars to arrest me in the middle of the night based upon a fraudulently obtained protection order issued in Broward County, Florida (a state I have never been) – and why the State of Minnesota and East Grand Forks funds relentless prosecutions against me regarding no real crime – rather, content I publish on the Web.

The tactic of accusing a witness of being mentally incompetent (such as was done with Lawrence Dean O’Bryan) to proceed was attempted against me (Timothy Charles Holmseth) in Polk County, Minnesota on August 30, 2019.

Ronald Galstad, the prosecutor for City of East Grand Forks, requested I submit to a psychological evaluation the moment I alerted the court that my trial attorney would be filing a federal deprivation of rights lawsuit against a cabal of lawyers, including public defenders, that conspired to rig my cases over a period of ten years and not file proper dismissal motions.

I did not fight the motion and on September 24, 2018 a court appointed psychologist reported I was entirely sound mentally.

These people are sick

Facebook0Tweet0Pin0
About Timothy Holmseth 696 Articles
Timothy Charles Holmseth is an award winning news reporter and investigative journalist. He is an FBI witness in a national profile kidnapping case. He captured rogue CIA and FBI child traffickers on tape discussing their operations. He has been targeted for a decade. In 2019 Timothy Charles Holmseth became part of the Pentagon Pedophile Task Force. Timothy Holmseth is the only reporter authorized to report original content for the PPTF. There is ONE MAN between Timothy Holmseth and President Trump.