EXCLUSIVE: Q – “THE PLAN” EXPOSED [THE GREAT APOSTASY] [THE ANTI-CHRIST]

On July 8, 2022, I reported, “DARK TO LIGHT (PHRASE USED IN Q POSTS) RELATES TO A TWO-SIDED SYSTEM THAT WILL USHER IN THE ANTI-CHRIST AND THE GREAT APOSTASY”.

The “Q” phrase “Dark to Light” was accompanied by the phrase “Trust the Plan”.

Now I am going to show you that the Plan was/is to trick you (PSYOP) into believing that a group of (evil) men are coordinating with President Donald J. Trump to move the world from Dark to Light.

These evil men are NOT working with Trump, but they have done a remarkable job of hijacking MAGA and creating that false appearance.

The BIGGEST and most ETERNALLY FATAL mistake you could make would be to believe that the change over to “Light” means a change over to a world where one’s life is based upon our savior Jesus Christ.

“Light” does NOT mean Jesus Christ in the context of their Plan.

“Light” is a false goodness and Alien saviors from outer space (created by Satan and/or Lucifer) which will be shown to you in the heavens in the form of orbs and other signs and wonders.

Be assured – the signs and wonders are created via demonic Fallen Angel technology that will astonish you because it has been kept hidden from you.

The following message was texted to former Minnesota judge Randi Lynn Erickson (Erickson is a federal plaintiff and follower of Jesus Christ who turned over evidence of cannibalism by U.S. Presidents to the U.S. military) by David Lester Straight.

“I talked to Ian yesterday from galactic foundation (orbs) I had a graphic vision about 1am, followed by waking this morning quickly first thing reaching for my iPad and seeing this right off….”, Straight said.

Straight sent Erickson a photo of a human presenting himself to light and said, “The orbs are going to enlighten the masses. We need to look for orbs stand like this and soak it up over time it is enlightening”. 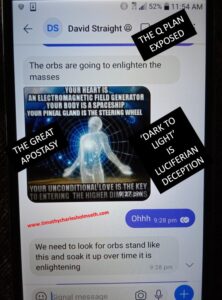 The following was written in the attachments Straight sent to Erickson.

Read it – and you will know their Plan.

THE LIGHT FORCES ARE TAKING OVER

This is the beginning of the establishment of an intergalactic confederation as the old system is crumbling in front of the eyes of earth’s population. The Galactic Confederation confirms that the light forces are now taking over now. We are moving into a heighted state of the awakening of the masses. The un-believers and mind-controlled population of earth are now moving into the first stage of awakening.

The collective consciousness is ready to receive the higher light codes now.

We continue to blast earth with photon gamma light beams. These codes carry a frequency designed to make this transition process as smooth as possible – or as the individual consciousness allows. For those who have already gone through the process of awakening, these codes will trigger your blueprints and place you on the super highway to 5D ascension. The official dismantling of the old paradigm has begun as the cabal leaders have fallen into their own trap.

This marks the ultimate death of a corrupt system that does not honor earth and does not honor life. You are now moving into the Golden age of Gaia at an accelerated speed. Do not engage in political discussions with those who still cling to their matrix programming. It would drag you down and lower your frequency. At this point, the tables are turning rapidly and even the MSM will be forced to report unbiased.

The forces of light are in full control and will begin to adjust the narrative now. You are being asked to assist and keeping your frequency and holding on to your vision of liberty, peace, and love for the human race. The revelation of truth is near. All darkness is coming to light. Many will feel devasted and feel lost or trapped. The programming is severe and people on earth identify with their beliefs. As these beliefs are beginning to be crushed they will be confused not knowing who they are.

Current events have been carefully premediated, planned, and executed as a corporation between the light forces and the earth alliance. Only a landslide of this caliber is powerful enough to Shake and awaken the sleepers. The events of 2020 have forced many to re-evaluate their belief systems. The political situation in the United State if America is the culmination of events that will bring the victory of light over darkness.

This marks the ultimate death of a corrupt system.