In the wake of the Ghislaine Maxwell arrest…Deep State scum bags know their crimes against children and humanity are coming out and they are trying to get ahead of it.

In the most recent pathetic attempt to make President Trump appear to have [non-existent] mental problems due to [non-existent] ‘child abuse’ from his father, the tabloid rag Daily Mail published a review of an extremely shitty book released by Trump’s loser niece. 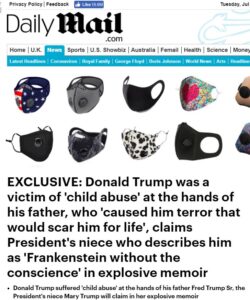 The latest book of lies (such as that of the shitty book written by John Bolton and his mustache) is a total joke and nothing can stop what’s coming.

That’s the reason Trump is now being attacked with headlines using the words ‘child abuse’. It’s because the Deep State freaks are trying to develop a reason Trump might be obsessed with child abuse – while they declare the obsession to be a mere trauma based delusion.

But it’s way too late for their bullshit to work.

When Trump defeated Hillary Clinton in the 2016 election, Clinton immediately deployed her former bodyguard, CIA black operator Craig Sawyer, in an effort to seize the ‘abuse’ narrative by forming Vets For Child Rescue with the help of foreign agent Alex Jones.

Sawyer soon became exposed after the public learned from a staff member he was running a huge donation scam for big money; was not rescuing any children, but, was making trips to Thailand etc. (business as usual for Sawyer).

Trump’s steady commitment to end child trafficking and abuse and restore families can be seen by Executive Orders and statements from The White House.

The following are only a few.

On December 21, 2017 The White House issued his Executive Order Blocking the Property of Persons Involved in Serious Human Rights Abuse or Corruption

On June 24, 2020 The White House released First Lady Melania Trump Supports the Signing of the Executive Order on Strengthening the Child Welfare System for America’s Children

On January 31, 2020 The White House issued Executive Order on Combating Human Trafficking and Online Child Exploitation in the United States

NOTHING CAN STOP WHAT’S COMING

President Trump knows how the largest human trafficking operation in the world is being run.