Has it all been right in front of our eyes the whole time?

Have we been watching a military intelligence operation unfold that is beyond epic? An operation that is biblical?

Did President Trump lure Hillary Clinton into a trap that would expose her as a demonic monster guilty of crimes against humanity?

On August 16, 2020 the Daily Beast began a two part series with installments entitled   ‘QAnon Promotes Pedo-Ring Conspiracy Theories. Now They’re Stealing Kids‘ and QAnon Incited Her to Kidnap Her Son and Then Hid Her From the Law.

The rambling composition consisted of tortured text where the reporter bent and grossly distorted reality in effort to create the appearance of a mysterious group of armed QANON followers that are going around the United States with mothers who had lost their kids to CPS – and kidnapping their children back from CPS and foster homes at gunpoint.

What triggered this bizarre story by the Daily Beast that included quotes from Hillary Clinton’s former bodyguard Craig Sawyer?

The reporter for the task force, Timothy Charles Holmseth, purports to communicate with high level members of the intelligence community and military and says he is ‘one man away from President Trump’.

Holmseth recently reported that a group of CPS social workers in Arizona were fired for creating ‘Professional Kidnapper’ shirts. 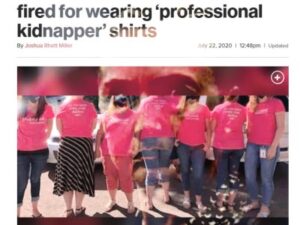 Holmseth connected child trafficking and international crimes to Hillary Clinton’s former bodyguard Craig Sawyer, who created what Holmseth calls a fake child rescue group – Veterans For Child Rescue (V4CR) – that has been put in place by Clinton and the CIA to control trafficking routes, intimidate and/or eliminate witnesses, and disseminate disinformation.

In fact – Sawyer, a former NAVY SEAL of SEAL TEAM 6 threatened Holmseth in writing that his “Team” was coming to take Holmseth out.

Does Hillary Clinton, Craig Sawyer, and others such as Alex Jones have something to worry about?

If yes – is that something they are worried about actually a ‘someone’ named President Donald Trump?

The basis and original formation of the Pentagon Pedophile Task Force has always remained somewhat shrouded in mystery – but the factoids of it’s origins are beginning to trickle out.

Emerging facts make Holmseth’s claim of close ties to the White House, DOJ, DOD, much, much easier to believe.

Holmseth, an award-winning news reporter and FBI witness became involved in exposing child sex trafficking in 2009 after he interviewed many members of Jeffrey Epstein’s and Ghislaine Maxwell’s child procurement operation which was connected to the Ukrainian Embassy in Washington DC.

And now…the formation of the mysterious Pentagon Pedophile Task Force is beginning to slowly come into view.

On September 19, 2012 FORBES published ‘To Catch Government Workers With Ties to Child Pron, Call the IRS.

Last week the IRS decided to award Bradley Birkenfeld his $104 million dollar share for helping bust UBS bank. Senator Charles Grassley (R-Iowa) and his staff were instrumental. Senator Grassley vowed to delay pending Department of Treasury nominations if the IRS Whistleblower Program, he wrote the legislation in 2006, continued to be mismanaged.

Money drives the crime. It is estimated that a criminal willing to molest a child in front of a live webcam can earn $1,000 a night. In Kittery Maine, at the “Danish Health Club,” one bust yielded $6.1 million in “door fees” over a five year period with “prostitutes” earning $12 million. Pimps’ earnings were not reported. The “door man” was a retired police officer whose wife worked in back. This bust happened because of one hard-working IRS agent, Rod Giguere.

Perhaps Senator Grassley will raise his powerful voice in support.

In 2017, Holmseth published information that showed Sawyer was appearing on various talk shows and purporting to be a form of ‘law enforcement’ in the United States, using what Sawyer called VIPR teams (Veterans Investigating Pedophile Rings) to arrest and expose pedophiles.

Was military intelligence and the DOJ watching Holmseth?

Was Holmseth instructed through back-channels to keep publishing the facts that were being suppressed by fake news?

Holmseth appeared to be on the exact same page as Lori Handrahan, Ph.D. and the disclosures she made in the FORBES article.

Holmseth screen-captured stories being put out by Sawyer and V4CR boasting they had ‘arrested’ an IRS agent. Holmseth said the ‘arrest’ of one single IRS agent was done to send a message to the entire federal government that snitches would be receiving a visit from Clinton’s VIPR teams. 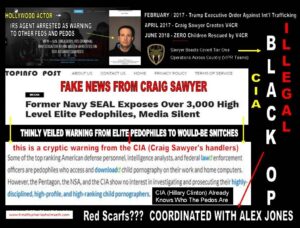 Holmseth was kidnapped three times by Deep State operatives in Minnesota who claimed the authority to imprison Holmseth for talking about, and publishing information about certain people and certain things.

The local police in East Grand Forks, Minnesota grabbed Holmseth three times claiming he violated an Injunction from a family court judge in Broward County, Florida (where Holmseth had never been; had no family there; and had never been charged with a crime) that placed sweeping restrictions on Holmseth’s speech, publishing, and gun rights.

Holmseth, through his bizarre refusal to back down, faced the Deep State gulag repeatedly.

Did Holmseth already know he would be protected by The White House?

It is a fact…U.S. Marshal’s were dispatched to a STATE OF MINNESOTA V. TIMOTHY CHARLES HOLMSETH court hearing in Polk County, Minnesota to protect Holmseth.

What was really going on?

Holmseth stated on a livestream that the PPTF had identified the massive spider web of networks of government officials who were using health information and a secret database, which involved Obamacare, to kidnap and traffic children at the industrial level [Cargo Ships / Underground Tunnel Systems] using privatized CPS and private courts.

Is Hillary Clinton truly going to hang from a noose as she famously stated?

Did President Trump lure her into a trap using a journalist and FBI witness named Timothy Charles Holmseth who agreed to be bait?