How do you like walking around on the land of Wisconsin while you are subjected to the Law of the Sea?

Look at the photo (below) of your Treasonous Governor as he stands beneath flags declaring war on you.

Wisconsin is holding a U.S. Marine as a Prisoner of War on their ‘Foreign Vessel  in Dry Dock’ classified as “Cargo”.

Hove intercepted the Treaty because she KNEW WHAT IT WAS! She scanned it and gave McConnell access to it on a computer screen so he couldn’t sign it. 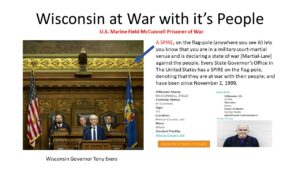 A SPIRE, on the flag-pole (anywhere you see it) lets you know that you are in a military court-martial venue and is declaring a state of war [Martial-Law] against the people. Every State Governor’s Office in The United States has a SPIRE on the flag-pole, denoting that they are at war with their people; and have been since November 2, 1999.

The United States of America ceased to be in 1999 after its third and final bankruptcy.

The Title 4 American flag was secured by Russell-Jay: Gould.

“What that means is the federal government had to physically vacate the District of Columbia, and the Trustee for that was the President of the United States. But, because the guidelines were null and void, which were the guidelines to elect a Trustee, which was the President, they can then vacate the District of Columbia, which was the 2000 election – the ‘Florid Chads,” Gould said.

The yellow fringe flag around the American flag signifies it has been captured by a private corporation in a shipping war under the jurisdiction of Admiralty and Maritime Law of the Sea, identified as advertised by the yellow rope fringe encircling it.

Call your respective State Governor today and demand that flag with a Spire be removed and notify the Governor you stand with Russel-Jay: Gould.