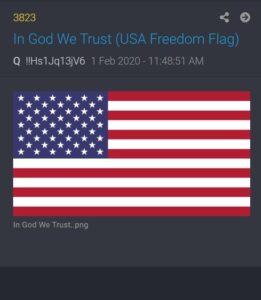 One month ago – I reported the significance of the American flag in an article entitled PROJECT QUANTUM: Field McConnell Update: The bankrupt United States ended in 1999 – Florida Chads – Foreign Vessel in Dry Dock.

Here is what I reported.

“What that means is the federal government had to physically vacate the District of Columbia, and the Trustee for that was the President of the United States. But, because the guidelines were null and void, which were the guidelines to elect a Trustee, which was the President, they can then vacate the District of Columbia, which was the 2000 election – the ‘Florida Chads,” Gould said.

“They had everybody looking at the Florida Chads – what they weren’t telling you was they slid it in to a foreign vessel in dry dock and made a determination at the U.S. Supreme Court was that the U.S. Supreme Court was the chief location under yellow fringe flag – to direct and fool the people so the People would only look at the Supreme Court. Now you got to remember the United States Supreme Court can only give you an opinion – they cannot give you a fact – no Law or Facts should be tried in court – what that is, is you can’t put your facts on trial in court; only put the condition of mind on trial,” Gould said.

Our government is not operating under the Constitution of the United States.

We are under Martial Law.

This is a developing series.