We announced earlier today that we are investigating if evidence was planted in the vehicle of Neely Petrie-Blanchard. Blanchard was arrested and charged with Second Degree murder of Hallett.

We have an update:

We have previously reported on a very troubled man named Levi Page who we have identified as being part of a Domestic Terror Group operating inside the United States. READ ABOUT THE GROUP – EXCLUSIVE: Federal Conspiracy Case: IT’S BIGGER THAN FLYNN!

We identified Levi Page as being connected to the NXIVM cult since he was a child, and, exposed how Page has been interjecting himself into missing children cases and threatening witnesses.

On November 16, 2020, the day after the murder of Christopher Hallett, Kirk Pendergrass, a professional colleague of Hallett, went on his usual You Tube Livestream called Kirks Law Corner to discuss the death of his friend.

During the Livestream show Levi Page appeared on the chat log and began to taunt Pendergrass about the death of his good friend.

“Kirk, what evidence was found in Neely’s vehicle,”  Page said.

Hallett had not been dead a day and Levi Page was taunting Pendergrass about “evidence” in Blanchard’s car. 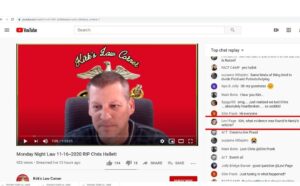 We have many updates coming.

Court records show Blanchard has pled “Not Guilty” and is being held with no bail.